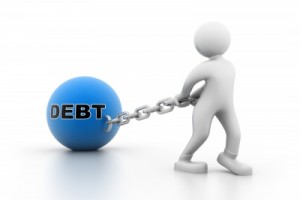 On Monday, we talked about how people, even smart ones, can get into debt. Getting into debt is easy and sometimes even fun, but there is always a price to pay. I don’t know about you, but I love having choices. Debt robs any choice besides having to make a payment. If you really want to start living the life you were meant to have, it’s time to get out of debt once and for all. The good news is that by following some simple steps, anyone can get out of debt.

Accept Responsibility For Your Debt

Now when I say simple, that doesn’t always equate to easy. It’s simple to lose weight by burning more calories than you consume, but how many people struggle with that one? I believe the first step in getting out of debt is to let go of the reasons that landed you here so that you can move forward.

It doesn’t matter if your debt came from bad decisions, taking out too many student loans, not getting or keeping the job you wanted, or even from having medical bills. Once the balance is on your credit report, it’s all debt and your responsibility. Debt will never get paid off with excuses, blame, or pity. That may sound harsh, but until you accept the situation, you are pretty powerless to change it.

Believe That Debt Is Not Forever

Some people never really get out of debt because they pay one thing off and then finance something else. We did that a few times before we finally broke the cycle. Society tells us that everyone has a mortgage, car payment, and credit card bills. Unless you want debt to be your way of life, you need to learn that society is wrong.

Yes, I do have a mortgage and we bought our cars through financing, but that doesn’t mean we have to keep trading them in every few years while taking out home equity lines of credit to buy more stuff. Decide that your debt is not forever and imagine how far your money will go when there are no more payments.

Figure Out Where Your Money Is Going

Now that we’ve completed our mental gymnastics, it’s time to see why you are in debt. The reason is probably because you spend more than you think. It was an eye opener when we finally wrote down where all of our money was going every month. $800 on groceries! $200 for clothes! $250 for eating out! $50 for gas station snacks! $10 for a subscription that hasn’t been read since Bush was in office. If you don’t know how you are spending money, there is probably more waste and fluff than you can imagine.

How Much Do You Owe?

For people who have never had debt problems, it hard to imagine not knowing how much you owe. As people who abused credit cards, we didn’t want to know. You can set up automatic payments every month and never have to open a statement.

It’s OK to cry for a little while after you determined the final balance. I’m dead serious about that.  Next, put that debt number in a place where you have to look at it every day. We hung ours on the refrigerator.

Budgeting is easier than you think. Write down all the expenses you can’t change like your mortgage, car payments, health insurance, etc. Then set realistic numbers for the variable expenses. If you are spending $800 a month on groceries, don’t set your limit to $100. If you do, you will fail, get discouraged, and give up on budgeting. I know because I did that more than once.

Also, don’t cut out all unnecessary expenses at once. I know some people have done this with success, but most of us are already depressed about our debt. Making entertainment mean sitting at home drinking water while playing Scrabble might not fly for people who are used to going out several times a month, at least in the beginning. While it’s important to make a smart budget, be realistic about what you can accomplish.

When you are used to having whatever you want when you want it, the ability to think about value gets lost. As you get further into your debt payoff, you’ll start to realize what things do add value to your life and what you can cut out.

Do You Have Something In Savings?

The emergency fund is very important for people who are in debt and live paycheck to paycheck. If you have nothing in savings, make that your first step. Having even $500 or $1000 in reserve could mean the difference between paying off debt or having to go back to using credit cards.

Figure Out How Much Extra You Can Put Toward Debt

After you’ve tracked your spending and come up with a basic budget, you’ve probably found a few things you can cut out or change right away that will add more money to your pocket. In a bloated household, you probably aren’t worried about $2o here or $10 there, but now it’s time to make every dollar count.

Challenge yourself to cut your grocery budget by $100 a month. Start packing your own lunch instead of eating out. Make coffee at home. Sell some of the things that are cluttering your life. There are tons of ways to find extra cash.

Whatever amount you come up with, put it directly toward the debt you have decided to tackle first. In our case, it was an American Express bill that was around $800. We were able to pay it off in a couple of months and it felt like we’d climbed Mt. Everest.

Look At Each Debt One At A Time

If we had looked at our debt as a whole every month, there would have been lots more crying and we might have given up and accepted debt for life. Instead we picked off our credit cards one at a time and celebrated every payoff.

That first $800 was kind of like pouring a glass of water on a forest fire, but it was our first step to getting out of debt forever. It was a victory and needed to be respected as one.

Even if you go cold turkey and cut everything to bare bones, it still probably won’t amount to more than a few hundred dollars a month. If you have large amounts of debt, you need to do more. Making money is the best and fastest way to get out of debt and beyond.

I’ve already done a few posts about how anyone can make more money. You don’t have to reinvent the wheel. Use the strengths you have to bring in more income. In my case, I took another optometry job. It doesn’t have to be sexy. It is hard to add more work hours to your week, but remember it’s only for a limited time. I’ll end today with a quote from Dave Ramsey that really stuck with me during out debt payoff,

Debt does not have to be forever!

Have you ever been surprised at how much you were spending?

Table of Contents
Accept Responsibility For Your Debt
Believe That Debt Is Not Forever
Figure Out Where Your Money Is Going
How Much Do You Owe?
Make A Realistic Budget
Do You Have Something In Savings?
Figure Out How Much Extra You Can Put Toward Debt
Look At Each Debt One At A Time
Making More Money: The Key To Erasing Debt