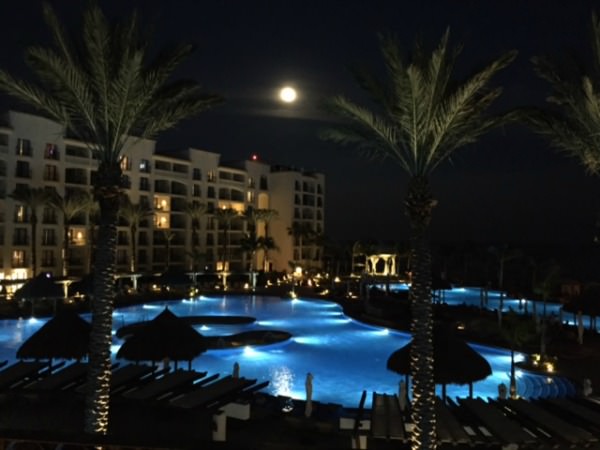 My family spent Thanksgiving at an all inclusive resort in Los Cabos, Mexico. Although we were out of the country, the resort certainly caters to American and Canadian tourists. We technically could have been anywhere in the U.S.; anywhere the weather was 85 degrees with an ocean anyway! Most of our vacations tend to be go go go, so this was a nice, relaxing break. Other than a few trips to the grocery store, we didn’t leave the resort at all. Was the extra cost of going all inclusive worth it?

At the Hyatt Ziva Los Cabos, basic rooms are just under 600 square feet! Ours had king size bed with another king size sofa bed, dining table and chairs, two closets, a huge bathroom with jacuzzi tub, rainfall shower, and double sinks. We also had a large balcony and were upgraded to an ocean view. Although we didn’t spend a ton of time in the room, having that much space was very nice. Most of our room time was spent sleeping or out on the balcony.

The area where we stayed in San Jose del Cabo was devastated by Hurrican Odile last year, so everything was brand new. I’m not sure what it looked like before, but all the furnishings in the room and on the grounds were top notch.

There were two huge main pools, one with a swim up bar where we spent most of our time. The resort also had a 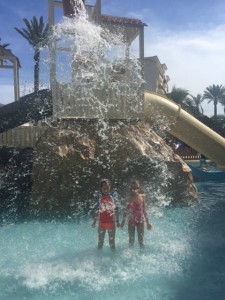 kids’ pool with water slides and a splash zone that poured torrents of water to play under. There was an enormous adults only pool that looked amazing, but I was only able to soak my toes in that one for a second. Maybe someday!

The pool area also had two hot tubs, tons of comfy chairs with umbrellas, and several tiki huts and pergolas for those who don’t enjoy direct sunlight. I basically had to drag my child out of the pool to eat or go to dinner. Although once she figured out how to order from the swim up bar, I no longer had to worry about dehydration. It’s very odd to hear your 8 year old order a pina colada (virgin, of course) The staff was amazing at taking care of children with all the kid versions of tropical drinks. 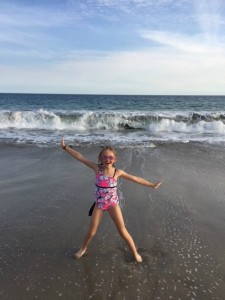 The beach was one of the cleanest I’ve ever seen. There was no seaweed and it was very uncrowded. We weren’t able to swim because the waves are way too rough in that area, but we had fun walking, shell collecting, building sand castles, and watching all the crabs scurry around.

There were merchants selling all types of souvenirs, but they were not pushy once you told them no thank you.

One of the best things about all inclusives is the food! If you have kids who eat a lot, it’s wonderful not to have to say no to whatever they want to try. We almost never order dessert when we go out to eat, but here, our daughter had cake or ice cream almost every day.

As Hyatt platinum members, we had access to premium liquors.  As we aren’t really big drinkers, this was probably a wasted benefit. The standard beach cocktails were just fine.  There was also a mini bar in our room stocked with soda, beer, and snacks that we had free access to. I thought this was another platinum perk until we met other families who did not have status but still had unlimited mini bar access.

The resort had tons of food options including fairly fancy Italian, French, Asian/Sushi, Spanish, ands steak house restaurants. There were also two buffet style restaurants that were open for all three meals. In addition, there were two snack bars, a coffee shop, and 24 hour deli. Even the most picky eaters should be able to find plenty of food.

Throughout the day, there were various activities offered all over the resort. Like the food, there was a bit of everything including trivia contests at the pool, beach volleyball and soccer, kid crafts and activities, Spanish lessons, yoga, and water aerobics. It rained on the last day of our trip, and I notice there were movies playing in the auditorium. I’m not sure if this was an everyday thing or because of the cloudy weather.

Each night at 8PM there was a kid’s program in the theater followed by a Las Vegas style show. We did two kid shows and attended a magician program. I thought they were a little cheesy, but our daughter loved them.

The resort also offers numerous paid excursions and spa treatments. You could end up spending quite a bit of money on those, depending on they type of vacation you’re looking for. Jim played golf once and I got a massage. Other than that, we were content to use the included amenities and activities.

How Much Did it Cost?

For us, this vacation was very affordable because we were able to book with credit card reward points. If we hadn’t had points, would we have shelled out for an all inclusive resort? 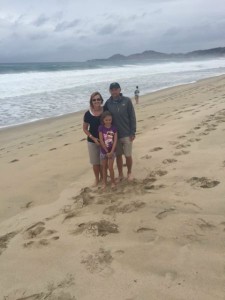 Normal rates for the Hyatt Ziva Los Cabos range from around $500-$1000 a night, depending on the season. Even with all the food, pools, and entertainment options, I’m not sure we would ever pay full price. Instead we would probably book the Hyatt Place that was right up the road for around $100 a night. We normally budget $60-$80 a day for food when on vacation, so the daily cost would still be much less than paying all inclusive rates.

We’ve stayed at several Hyatt Place hotels in the past. Their rooms are spacious and include a decent free breakfast, not luxury but more than adequate. They have a small pool that would not have provided nearly the amount of entertainment as the Ziva, but that only means we would have had to seek out other things in the area to do. Not as relaxing, but it would have still been fun.

I think all inclusive resorts can certainly be worth the cost in certain circumstances, but I’m very happy we’ve discovered how to use points that allow us to stay at luxury resorts for the price of budget hotels!

Do you think all inclusives are worth the cost?

Table of Contents
Accommodations
Pools
Beach
Food
Entertainment
How Much Did it Cost?