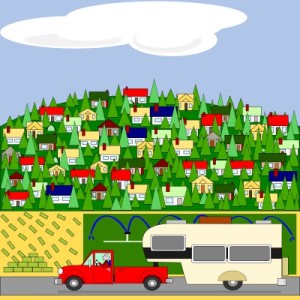 Do you love to take trips, but hate paying for hotels? Love the outdoors, but aren’t one for roughing it? Well, you could churn some credit cards to get free accommodations, but if you are paying off debt or into saving money, you could learn to love the KOA.


What is the KOA?

Kampgrounds of America was founded by a business man named Dave Drum in 1962. He was inspired when he saw people heading for the Seattle World’s Fair and he set up a campground on his land by the Yellowstone River in Monata. He offered showers, restrooms and a small store. KOA turned into a franchise and now has over 450 campgrounds in North America. KOA’s vary in ammenities and locations. There is actually a KOA right by Circus Circus in the heart of Las Vegas, and there are many, many more in rural and remote places. While all have the same showers, restrooms, and stores as the original, many offer unique experiences like staying in tee pees or train cars. Some even offer free pancake breakfasts or live entertainment.

Why Do I Love KOA?

Before our daughter was born, we were die hard tent campers who tried to get as far off the beaten path as possible. One child later, I have no desire to brave the wilds and battle the bears, skunks, and squatting in the woods to pee. While many people take their kids on back country adventures, we like being close to running water, and I honestly don’t ever want to go two days without a shower anymore.

We used to drive for hours looking for the perfect campsite. With KOA, you know where you’re going and have a spot all reserved when you get there. We have a small pop-up camper, and we can choose a site that won’t leave us lopsided and sliding downhill all night long.

Our daughter is a great little hiker, but she does succumb to whining when she starts to get tired or bored. If we can bribe her with a pool later, she is much more eager to finish a hike without too much complaining. Most KOA’s have a pool or playground for the kiddos. If we forget something, they also have the little store. It is pricey, but if you are not close to town and forgot the marshmallows, you aren’t in the doghouse.

While staying in the wild is the cheapest option, and some campgrounds are less expensive, I’ve found KOA’s to be really reasonable. You can even stay in a cabin for around $65 a night if you don’t have a tent or camper.

While we do stay in other campgrounds or in state parks, we like having a KOA option available in most places. Although I hate to admit it, I do like my creature comforts. I’m not one to shy away from an adventure, but while my daughter is young, it’s nice to know what we can expect if we are going somewhere we haven’t been for a camping trip.

Do you camp? Do you like KOA or is it too commercialized?