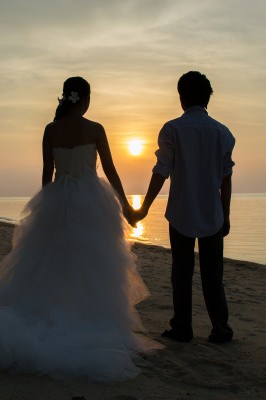 June has long been the most popular month for weddings. As couples are planning to walk down the aisle, hopefully, they are also planning their finances as a married couple. Not being on the same page financially is a reason many marriages don’t work out, but what if the happy couple does talk about money and determine that the numbers just don’t make sense. It is interesting to look at whether some couples can save money by not getting married.

There was a good post at Retire By 40 recently about how it might be easier for single people to save money, but what about couples who don’t get married at all? We will assume that our theoretical couple cohabitates and is committed as if they were married.  Are there money benefits for avoiding a wedding?

For many couples, especially those with similar incomes, marriage increases income taxes. When married couples who file taxes jointly pay more in tax than they would have had to pay individually, this is know as the marriage tax penalty. For example, two people who each make $80,000 a year and file taxes individually would be in the 25 percent tax bracket, but their combined income puts them into the 28 percent bracket.

For high wage earners, there are other taxes that kick in on investments and Medicare at certain income levels. For singles, $200,000 is the magic number, but for couples, the income limit for more taxes is $250,000. Also, personal exemptions start to phase out at $250,000 for individuals and $300,000 for joint filers. Although the government assumes you’re rich if you make more than $250,000, it doesn’t seem fair that two people can earn $199,999 each and not be subject to higher taxes, but if they get married, an extra $50,000 puts them into the elite tax category.

Lower income wage earners can also be penalized by marriage through loss of the earned income credit. A credit that was meant to encourage people to work actually might make some married people choose to work less if it means more in taxes.

While your tax bracket is certainly not your effective tax rate, many couples do end up paying more income taxes simply because they choose to get married.

With the Affordable Care Act, couples can be penalized by losing their health insurance subsidy. In Colorado, an unmarried couple would qualify for a heath insurance premium tax credit if each of them made less than $46,680 or $93,360 combined. If they got married, they would have to file jointly to get a subsidy, and the income level would drop to $62,920.

Very low wage workers have it even worse. Individually, each person could make $16,105 or $32,210 combined and be eligible for Medicaid. If this couple got married, their joint income could only be $21,707 to stay on Medicaid. Even with a subsidy to purchase health care off the exchange, many low income families can’t afford the premiums and choose to go without.

Another type of penalty happens when an individual who qualifies for an insurance subsidy marries someone who has an employer sponsored group plan that allows family coverage. Regardless of income or whether or not the employer pays for family coverage, this person is no longer eligible for a subsidy and can see their health insurance costs go up hundreds of dollars per month.

The Bonus for Getting Married

All is not lost for married couples. Many people enjoy lesser taxes once they tie the knot. This is especially true for couples whose incomes are on the opposite ends of the spectrum. A high wage earner who marries someone with a low income might move to a lower tax bracket. The same can happen if one spouse decides to stay home with the kids or to start a business.

Married couples who stay married for a long time also benefit from increased Social Security benefits and tend to have a higher net worth than singles. Studies have also shown that married people tend to be healthier than singles, unless the marriage is rocky. The stress of a bad marriage can trigger many mental and physical health problems.

Should Couples Get Married or Not?

Personally, I am a firm believer in marriage. Part of it comes from being raised in the Bible Belt, but a bigger part stems from the commitment of making a vow to someone you want to spend the rest of your life with, even if it means paying more in taxes. That doesn’t mean I can’t see the benefit of staying unmarried for couples who are struggling with finances. Having a few thousand dollars less per year might mean going into debt or not being able to get ahead.

I guess the most important thing is to always talk about finances before and after making any sort of commitment. Make sure to choose your partner wisely. A good marriage can go a long way toward well being in general, but a bad marriage or going through a divorce is worse than any marriage tax or penalty the government can throw out.

Should couples avoid marriage to save money? Do you think married people have more money than couples who choose not to tie the knot?