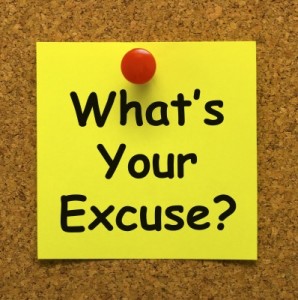 If you have a blog, does it seem that all big things seem to happen when you’re out of town? I feel like that happens to me anyway. While I was in Kentucky last week visiting family, an interview I did with Business Insider got picked up by Yahoo Finance and traffic was off the charts.  The interview was about paying off our credit card debt, and I knew there was potential for some blow back, but you really can’t turn down that sort of exposure if you are trying to grow an online business, so I accepted the invitation without hesitation. After the interview, I wondered if this might be my first real opportunity to meet some of the trolls that many of my online friends have already encountered, and boy was I ever introduced last week. You can read the comments here if you’d like, but the majority were not kind. Why on earth would anyone hate me for paying off debt? Hating me gives people a great reason not to pay off their own debts. You can’t ever pay off debt with excuses.

I Take Full Responsibility For My Debts

Many of the comments were along the lines of “these people were stupid for getting into debt in the first place” or “they should have known better.” Yes, I agree 100% with all those opinions. I have always said how dumb it was to rack up over $30,000 in credit card debt, and I don’t blame the credit card companies, banks, my parents, former employers, advertisers, Alec Baldwin, or anyone else besides Jim and myself. We lived above our means and we paid the price. No one put a gun to our heads and made us use credit cards to pay for things we didn’t have money to buy.

Internet trolls love to pick apart anyone who has paid off debt or saved lots of money if they didn’t grow up living in a cardboard box and ever made more than minimum wage while supporting 5 kids as a single parent. The people commenting loved to speculate about how much money we make. They assume because I am an optometrist that we must make over $200,000 a year and we can pay off debt with no problem.

While we never made that much money, I would say that we have a good income for where we live. In our area, we are at the top of the income bracket. If we lived in LA or Manhattan, we’d be middle class. Yes, it’s much easier if you have skills or training that allow you to make more money when trying to get out of debt.

I Won’t Apologize for Earning Money

I really did not get that upset over most of the comments. I was prepared because my friend, Holly, has written a great post on how to deal with online criticism. It does hurt when people take something positive you’ve done and skewer it, but that’s to be expected if you put yourself out there in the public. I accept that. More haters mean you’re doing something right in the online world.

What does bother me is how people seem to think I turned 18 and someone drew my name out of a hat and gave me an optometry license. To be where I am now, I worked my tail off to get scholarships to go to college. I took out loans for what those didn’t cover. I went to school for 8 years to get a degree in a field that offers a good salary, and I poured hundreds of thousands of hours into my business and into networking, going to things like chamber of commerce meetings and business after hours, and supporting local events to make my practice a success. If you do the same, you can have the same results.

To be successful and earn a high income, most people have to plan and work for years. That meant I didn’t get pregnant in high school. I didn’t party my way through college, and I didn’t half ass my way through 9-5 to get to happy hour after work. I’m not disparaging anyone for how they live life, but everything we do or don’t do is a choice, always. I won’t ever apologize for earning money. I worked too hard to let anyone make me feel bad about having a good income.

It’s Much Easier to Make Excuses Than Solve Problems

Obviously people reading my interview were interested in paying off debt. Instead of taking away things that might help, they see that I am not like them and immediately dismiss me. I have news, people. If you are looking for the perfect article titled “How John Smith who Lives in Kansas City with Three Kids and Works at Kroger Can Pay off $10,000 in Credit Card Debt ” you probably aren’t going to find it.

John Smith can call me trite and make the excuse that he doesn’t earn my salary. Therefore, he could never do what I did.

I hate being preachy, but until you quit the excuses and take responsibility, you can’t, you won’t, you never will. Instead, take whatever you can from me, from Dave Ramsay, from Suze Orman, from all of the amazing bloggers who have done extraordinary things and use that. Maybe you won’t ever make $100k a year, but does that mean you don’t have to try?

You can keep making excuses, but I would argue that they are really choices. I strongly believe no choice is ever too bad to overcome. It might take longer, and you might not do it my way, but you can pay off credit card debt if that’s what you want. If you live within your means and find ways to earn more money, I promise anyone can pay off debt, even if it takes a while. Once you change how you think about money and spending, you’ll stay out of debt.

I think I’m going to dedicate this whole week to stopping excuses. If you blog, I challenge you to do a post about that topic. Don’t use the excuse that I already wrote about it either! What is the worst excuse you think people use for why they can’t pay off debt?