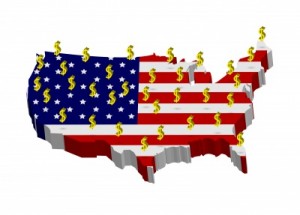 Ask 50 people their opinion about the best places to raise kids and you might get 50 different answers. Some people would lop off their left arm before leaving one of the coasts for the Midwest. Most Southern people I know would not move west of the Mississippi if they were offered a million dollars. Looking from a purely financial viewpoint, lets look at some of the cheapest states to raise kids.

Ah, the Land of Enchantment! I used to live in New Mexico and we currently reside only 40 miles from the border, so I’ve had some first hand experience with this state. To be honest, there are some armpit worthy parts of New Mexico. The state has a high teen pregnancy rate, lots of poverty, and was ranked as one of the worst economies in the US last year. Why on earth would anyone choose to live in New Mexico?

Despite those disappointing statistics, New Mexico is not all that bad, IF you look at certain areas of the state. Research, health care, aerospace, energy, and technology jobs are available. New Mexico offers very lucrative tax incentives for businesses. That’s why Virgin Galactic, Intel, and many Hollywood movie productions love doing business there.

As far as places to live, scientific minded Los Alamos has very strong schools, low housing prices relative to salaries, and 62 percent of it’s residents hold a bachelor’s degree or higher. Santa Fe has multiple cultural and artistic avenues. Albuquerque suburb, Rio Rancho, has a low cost of living and great schools. Most of New Mexico has access to amazing recreational activities.

New Mexico has some of the lowest property taxes in the country and offers high school students help with college in the form of the Legislative Lottery Scholarship. It is not based on financial need. All kids have to do is maintain a 2.5 GPA after their first semester. Not bad at all!

Texas is one of seven states that doesn’t collect state income tax, although they do try and make up for it with higher than average property taxes. Regardless, the economy in Texas continues to grow while cost of living remains low relative to salary.

Towns like Frisco and McKinney near Dallas and The Woodlands near Houston rank  high as far as schools, household income, and affordable housing. Day care costs in Texas are also less than in other major cities. At $694 per month for infant care, it’s not cheap, but much less than in places like New York ($1137/month) or Massachusetts ($1248/month).

OK, Mississippi has some big flaws. It ranks worst in the nation as far as schools, health, and income. The good news is that just about everything in Mississippi is cheap! You can live pretty large on a $50,000 annual salary.

Mississippi is not all bad. either. I have a good friend who lives in Olive Branch, MS, where the annual family income is around $70,000 a year. It’s only about 20 minutes from Memphis, where there are tremendous music and art festivals all the time. She can afford to send her kids to private school, well, because tuition is much cheaper in Mississippi than other places. While hot in the summer, other seasons are mild. Her children are involved in dance, sports, and they are only a few hours drive from the Gulf Coast.

Any State Is The Best State If You Make It One

While I only looked at three of the cheapest places, a pretty good argument can be made that any place, despite rankings or polls, can be a great place to raise kids. While dollars go much further in the Midwest and Southern US, that part of the country often lacks as far as overall quality of schools, culture, diversity, and access to really high salaries. Living in very expensive places like Manhattan or Los Angeles might mean better access to those things, but less of a chance at home ownership or being able to save for college. It’s all about what you value.

For our family, we were pretty much established before the thought of having a kid. While Southwest Colorado isn’t ideal in some ways, we have more positives than negatives, and that’s why we stay. If prospective parents know their current salary and location does not support the kind of lifestyle they want for having children, it might be worth taking a look at one of the cheapest states to raise kids.

Why do you live where you do? Did having kids influence your decision?