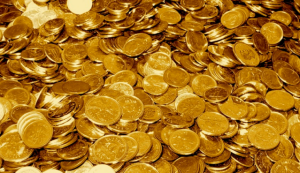 The United States Dollar (USD) and gold have been in a close relationship for more than 200 years. The first 100+ years of that relationship was harmonious because the gold standard was in operation and the value of a unit of the dollar was related to a specific amount of gold. In fact, the greenback up until 1933 had the words “Will Pay to the Bearer on Demand” (gold) and some new notes even had the clause up until 1963. From much of 1900 to 1971, people could technically approach a bank in the U.S. to convert their dollars into gold.

However, starting from 1971, the USD and gold started a contrastive relationship after the harmonious relationship ended with dissolution of the gold standard. The USD became a fiat currency that was not backed by a physical commodity. More so, its value could be based on the laws of supply and demand. Gold was also forced to adopt floating exchange rates because the fluctuations in the value of the USD often cause the trading price of gold to fluctuate.

An inverse relationship begins between gold and USD

The first reason that causes the inverse relationship in which gold is getting stronger while USD weakens is that a weak dollar causes the value of other currencies to rise. Gold is dominated in USD; hence, people can use other currencies to buy more gold for fewer dollars. When investors increase their demand for gold in order to take advantage of the weak dollar, the demand for gold tends to increase and an increase in demand often leads to an increase in price.

Secondly, many investors (outside the U.S.) consider the USD as an alternative investment because of the inherent stability of the U.S. economy. High net worth individuals in volatile regions tend to keep a substantial part of their wealth as gold to protect against erosion in the value of their wealth in times of geopolitical crises. However, when the USD appears to be falling, such investors usually consider gold as safe-haven asset.

It is worthy of note that gold and USD might see a concomitant increase in value occasionally. Both gold and USD are seen as safe-haven assets and investors from other countries can flock to both USD and gold when they have increased volatility in their countries. 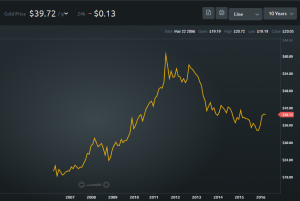 To bring the point home, a $10,000 investment in gold in 2005 would be worth an impressive $20,820 today if you did not lift as much as a finger on the trade and you did not apply compound returns for cumulative gains. In contrast, if you had invested that $10,000 into buying the USD, your USD holdings would be worth $8,265 at the end of 2015. Gold has outperformed USD in the last 10 years and the current level of geopolitical tensions and global economic uncertainties suggest that gold will outperform USD in the next 10 years.