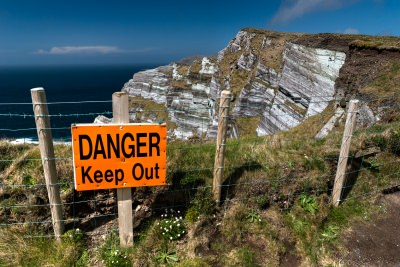 When searching for ways to pay of debt, build an emergency fund, or save for a major purchase, anyone will tell you that earning extra money is the fastest way to accomplish those goals. Increasing my income was one of the ways we were able to pay off massive credit card debt a few years ago. While the overall benefits more than outweigh any potential negatives, there are a few dangers to look out for when making extra money. Hopefully you can avoid those  pitfalls to make sure that all extra income is serving its purpose.

Unless you take on a traditional job for extra money, income earned from side hustles is usually paid without any tax withholdings. That means that you’re responsible for Medicare, Social Security, and income taxes. It might be tempting to go ahead and use your new found money right away, but remember that a tax bill is coming up.

If you’re new at earning extra income, you should save about 30 percent for taxes. After the first year, if you continue to pull in side income, you’ll need to set up estimated quarterly payments to Uncle Sam and to your state if it levies income tax. Another way to combat tax surprises is to increase withholding from a traditional W2 job. Either way, make sure you don’t forget about taxes, and don’t be afraid to consult an accountant if you need help. Calling the IRS to straighten out problems is no fun!

Making all the extra money in the world does not good if you increase your spending levels to match. Most people in my real world life have no idea what it means to earn money from side hustles. I sought out advice from a friend recently about my job dilemma, and she was shocked when I told her that I made several thousand dollars per year online. She was also blown away that I saved every penny to cover our home and rental property taxes and insurance and that anything leftover went to retirement. My friend is a very frugal person, but she said what most people probably would say about having extra money,

“Don’t you want to go an a shopping spree?”

The honest answer is yes. Sometimes I do want to go on a shopping spree, but that would defeat the purpose of my efforts. A new shirt or shoes is not something that’s going to allow me to stop working by age 50. I do shop, but it’s almost never with my side income. It’s too valuable to spend on things that don’t help reach my ultimate goal.

Spending Too Much Time on Side Hustles

I think many of us who side hustle have been guilty of spending too much time on our pursuits. Unlike traditional jobs where you show up for a number of hours and get paid a set amount, side income potential is only limited by the amount of time you are willing to spend.

I don’t know the best way to avoid this danger other than to try and set boundaries and spend some time each day on yourself and those who are important to you. All work and no play might mean more income, but at what cost?

Best Ways to Avoid The Dangers of Extra Money

After you’ve saved 30 percent for taxes, give your money a purpose. It’s much harder to spend a dollar knowing that you’re taking away from your early retirement fund or get of debt race.

Take the rest of your extra money and put it some place out of reach. Since our extra money goes toward housing and rental expenses, it gets deposited directly into an online savings account. It’s at a different bank than my bill pay account and takes two to three days to transfer. Not being able to access it easily keeps me from reckless spending.

You can also invest side income right away. Whether you put in into an IRA, solo 401(k), or use it for trading on stocks, sending extra money into investments keeps it from being spent mindlessly.

Likewise, if you are earning money to pay off debt, make your payment as soon as you get paid. Don’t leave money sitting around as a temptation.

Earning side income is a sure way to get out of debt and increase wealth, but it does come with a few potential downfalls. Remember to save, spend mindfully, and make the best use of your time in order to avoid the dangers of making extra money.

Do you think there are any potential negatives from earning side income? How do you know when to slow down and stop working on side hustles?