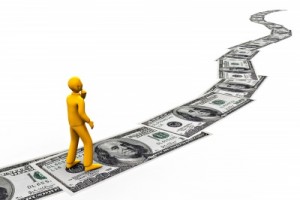 We all know how important diversity is in investments, but I also believe having diversity in income is just as necessary. Anyone who has ever lost a job would probably agree. While having an emergency fund can save people from disaster, having two or more steams of income could mean the difference between insomnia, stress, and having to take the first thing that comes along vs being able to take your time and find a better or more rewarding job or career. For me, diversity in income is the key to sleeping better at night.

We Want You To Work, We Just Can’t Pay You

I recently had some time to ponder the concept of diversity in income after one of my employers didn’t pay me for four months! I have a contract position with the federal government at an Indian Health Service clinic. Federal employees tend to have very stable jobs and regular benefits, but as a contractor, all bets are off.

I submit a monthly invoice and generally get paid within two weeks, but it’s not uncommon for the payment to take a month. I’m used to that. However, some sort of glitch that no one can explain happened last fall, and I stopped getting paid.

The Difference Between Fear And Inconvenience

Since my government money never comes at the same time, we generally don’t use it for regular monthly expenses. It’s the money we invest and save for tax estimates. While it sucked not to have that money when I was used to having it, it really wasn’t a big deal as far as paying the mortgage or buying groceries. If we have to wait a few months to put money into our HSA, it isn’t a big problem.

Now, if this had been my only job, I would have been sweating bullets. Even with a six month emergency fund, going four months with no idea of when payment might come would create some stress about how to pay our bills. If I suddenly lost this job, not having other income to fall back on would make me downright frightened.

How To Get Multiple Streams Of Income

It would be nice to have a little genie who granted multiple income producing streams with the blink of an eye and some pixie dust, but realistically, most of us have to hustle to diversify our income. I was looking through our W2’s and 1099’s last week for tax organization and I was really proud that between Jim and I, we have 9 sources of income that make up our take home pay. How on earth did we get that many people to pay us?

We’ve both put in years of networking with and studying other professionals in our areas of expertise. No, I can’t say it was always fun to spend a weekend at a seminar or host an after hours networking event. We often spent money to do things we didn’t particularly enjoy, but it has paid off in spades.

If all my optometry jobs dried up tomorrow, I can’t guarantee I would be able to replace them right away, but I have several contacts who could probably give me a job or refer me to someone who needs help. Once you establish yourself as dependable and people are aware of your skills and talents, it is much easier to find work. If no one knows you or has any idea what you do, why would they hire you?

Jim has worked especially hard over the past few years to further his skill set. Even though his job position was eliminated last year, he had no trouble transitioning into a different and better paying job. Again, it was not fun for him to volunteer for tons of committees or work full time while getting a new degree, but that’s what you have to do to get noticed.

It doesn’t matter whether you further skills in a similar career path or do something totally different. If you can be good at something people will pay you to do, whether it’s corporate consulting or walking dogs, that’s huge!

An important goal of having multiple streams of income is to make more money than you need every month. Then, make sure to put that money to good use. This really clicked for us while we were paying off debt. If we could hustle that hard to pay off what we owed, there really was no limit on what we could do next.

Since then, we’ve used a chunk of our income to invest in real estate. While last year was not great for overall rental income, in the future, we expect our rental properties to pay our living expenses. We are also investing in low cost index funds at Betterment. It will be a while before this provides a significant stream of income through interest and dividends, but if you never start, you won’t get there.

Years ago, I was more than happy with a single job, but now I see how depending on one income for life doesn’t get me to the place I want to be. Is it possible that all of our income streams could turn into a trickle at the same time? Sure. Is it likely? No.

If all goes as planned, our diversity in income will allow us to retire early. If life doesn’t follow the path we hope, I will still probably sleep pretty well at night because our eggs are in multiple baskets. Even if building diversity in income takes a while, I encourage everyone looking for safety and prosperity to give it a try.

How many ways did you get paid this year? What skills are you working on to increase your income and security?