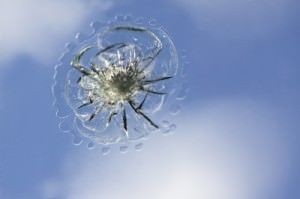 We all know that DIY car repairs can save tons of money. I would love to have pocketed the money we’ve spent on car repairs and maintenance over the years, but who am I kidding? Everything under the hood looks like a thingamajigger to me and watching a million YouTube videos isn’t going to help. However, I have finally found one car repair that anyone can do at home.

We have a 1999 Civic named Yertle that I drive almost exclusively in the summer. Yertle is old and slow but runs great and gets good gas mileage. We are all for keeping him running but don’t want to spend more than necessary.

I set out for town one Saturday a few weeks ago and noticed a rock chip in Yertle’s windshield. If you’ve ever had a chip in your windshield you probably know what happens if you let it go. The whole windshield has to be replaced, which can cost a few hundred dollars.

We seem to get a couple of rock chips a year, and they usually cost around $30 to replace. I called the glass shop we use only to find them closed, along with every other glass repair shop in town. It’s the weekend in a small town.

Have I Ever Been to the Auto Parts Store?

I stopped in at an express lube place on the off chance that they might do windshield repair, but no luck. The mechanic did say that he thought they sold kits at the auto repair store to fix chips. I’m not sure I’ve ever been to the auto parts store, but I always love a new experience. What a lovely place! For $14.99, I bought the kit, thinking it was probably throwing money away, but that we’d give it a try.

To my surprise, the kit worked perfectly and was easy to use. It only took a few minutes to do the repair, and then the windshield had to dry for a couple of hours. It has been fine ever since , and you can barely see where the original damage was.

Fifteen dollars saved might not seem like a ton of money, and if this had taken hours to do, it would have been a waste of time. Small savings add up over the course of time, and maybe this will encourage me to look into other easy repairs in the future.

Earmark Helps You Save Money

I used this savings to put toward a mini-trip we are taking this weekend. I’ve been testing a new smartphone app that Erin at Broke Millennial hooked me up with. I’m into techie things about like I’m in to car repairs, but this one is really easy. It’s called Earmark*.

Earmark tries to recreate the psychological rush of impulse buying by allowing you to see what you can buy if you forgo unnecessary spending. For example, I set a earmark of saving $200 for this upcoming weekend trip. Whenever I passed on spending, I entered the amount and it automatically showed me how close I was toward reaching my goal.

Some of the things I’ve saved on recently were skipping the movies to go to the park, packing a picnic lunch instead of eating out, and eating the food we already had in the freezer and pantry instead of grocery shopping. Each thing by itself might not seem like a big deal, but it’s nice to have something that tracks your progress so you can see how it does add up. Maybe I didn’t save enough to retire this month, but I did save enough to pay for our weekend getaway.

*Update: Earmark has been removed from the app store until further notice.

How much did you save this month? Do you do your own car repairs?