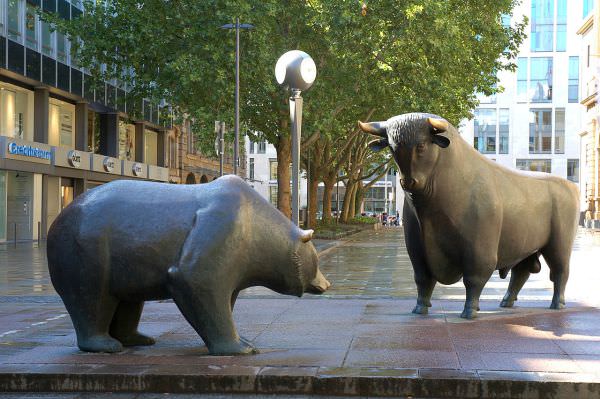 There are several reasons not to pay attention to the news. Anyone looking at headlines lately can’t miss seeing headlines like Dow plunges, stock market suffers worst one day drop since 2008, US stocks tumble on global slowdown fears. If hearing that makes you want to stuff money under the mattress, you’re not alone. Fear is a huge motivator when it comes to investing. We work hard for our money, and it’s painful to see balances plummet due to unforeseen events that we don’t even really understand. As hard as it may be, don’t fear stock market downturns.

I’m sure our parents and grandparents have many stories of watching the economy and stock market fall and recover. In my adult life, I only have one period of turmoil under my belt, but it was a doozy.

Living Through a Stock Market Melt Down

At the beginning of 2008, I was a new Mom who owned a business. Most of my free time was spent trying to figure out how to keep all the plates in my life spinning. We were seriously in debt and almost living paycheck to paycheck, even though our income was pretty high. The one bright spot in the financial picture was my retirement account.

I hadn’t ever maxed it out at that point but had began contributing as soon as I got my first real job. With the company match, it had grown to a respectable amount. Then, toward the end of that year, financial hell was unleashed. Companies were crumbling. Jobs were being shed at a rapid pace. People were losing their homes. I had no idea if my business would keep paying the bills.

Despite all the negativity, the hardest part for me was seeing my retirement account balance lose over a third of its value. This was way before I got my head out of the sand and actually studied stocks or market returns. All I could see was minus signs and red on the quarterly statements. I came very close to pulling what was left and sticking it in a money market fund. It was a classic knee jerk reaction that many, many people followed through on.

The reason I didn’t jump ship was because my former boss and mentor talked me into staying the course. Obviously, this wasn’t his first rodeo, and he didn’t want me to make a huge mistake that would impact me for the next few decades. So what did I do?

I don’t think the economy is going to go back to 2008, but we are due for some market corrections. After seeing my retirement balance sink during that turbulent time, I’ve been overjoyed to see it rebound and then some.

Remember to view downturns like discount periods. Money is never lost in the stock market until you sell. Holdings may be worth less at the moment, but you still own the exact same number of stocks as you did before a market correction. If you can hold on or even buy more when prices are low, you’ll have a great return on investment once prices go back up. If you bail and sell as prices are going down, you’ll never be able to get that value back.

This advice only works if you are planning on leaving money in the stock market for ten years or more. If you need invested money before then, it’s important to have a conservative mix of bonds, cash, or other stable investments. Certainly don’t rebalance it all right now while the market is down, but look into changing your investment allocations if money you’ll need soon is heavy in stocks.

If that sounds too complicated, consider using a platform such as Betterment where you can easily select your risk tolerance, goals, and have investments chosen that fit your time frame.

One of the positive things about being over 40 is having enough life experience not to fear things that are beyond my control, stock market included. All anyone can do is set up for the best possible outcome and try to ignore all the hype and hoopla media outlets try to sell. If you are a long term investor, there is absolutely no reason to fear a stock market downturn.

Did you see investments fall in 2008? Have you ever sold as a reaction to a market downturn?