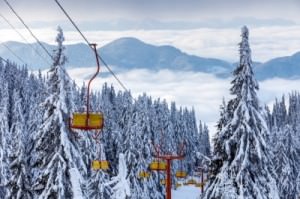 A few weeks ago, my family challenged ourselves to come up with enough extra income to buy ski passes for Telluride this year. We needed $600 to allow us to go three times. We do have money in savings that we could have used, but that’s really no fun. This is certainly a want, not a need, so we felt raising money was a better option. We haven’t been skiing in Telluride for a while due to cost and the fact that we were paying off credit card debt. Now since that’s done, we get to have some fun again. How did we do with our extra income?

Jim made $200 in landscaping money. Sadly, he has another $100 coming for a few end of the season tasks, but there won’t be any more yard mowing until next summer. If only I could talk him into shoveling snow……. Another fun benefit of landscaping for a side gig is that you can tell people that’s your job. If salesmen think you have a high income, they try to sell you lots of things. If they think you mow yards, they leave you alone!

I also made $150 by writing about eyeballs  for a major health website. After firing me as a freelance writer in early September, they sent me an email saying they made a mistake and wanted me back. I guess they don’t have any other writers who know about eyes.

We cleaned out the closet and garage and made $226.80 after Ebay fees. Honestly, unless you are a minimalist, you probably have something to sell on Ebay. My Sonicare toothbrush died,  and I had a package of tootbrush heads that hadn’t been opened. I sold those for $9. We sold a Tinkerbelle costume for $34. I had a Macy’s gift card for $47 from returning a gift. We don’t have a Macy’s anywhere close to us, and I never shop there anyway, so we sold that for $43. I’d rather have the cash to spend on something useful than a shirt I don’t need.

If you have items that are too bulky or not worth selling on Ebay, consigment is a good option. The shop usually takes half of the sale price, but they can generally get higher prices than you would make with a yard sale. You also don’t have to deal with the hastle of having a sale or dealing with weirdos on Craig’s list. We made $52 in consignment sales, mostly from selling our daughter’s outgrown clothes and a few household items.

No, it isn’t close to Making Cents of Sense income, but this was easy stuff we did in addition to our regular salary and blog income. We made so much that we don’t even have to use the $100 saved up from the daughter’s gift money collection from the grandparents.

As I’ve said many times before, anyone can make at least $500 in extra income per month. Use skills you have to make extra money. It does take a bit of effort, but it’s well worth it, especially for paying off debt or for buying things you really can’t justify as needs.

What goals are you saving up for? How are you going to earn extra income this month?