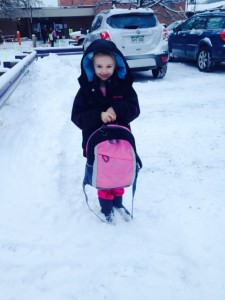 Have you ever had your day made worse by a moron? Ever had to change plans or expend more effort based on some else’s stupidity? I am working on this post at the public library right now because some moron took out a telephone pole and wiped out my home internet. After having almost no snow in January, it looks like it just might snow every day in February. Maybe it’s because of the Broncos annihilation in the Super Bowl, or maybe we are just due, but it’s slick out there people. Slow down!

I know anyone can slide off the road in icy conditions, but unless you are blind (in which case you shouldn’t be driving), you can easily see that the roads are very snow packed. The normal speed limit on our road is 40mph in good weather. It should be 20 in snow. This accident happened right after a stop sign, so I can only guess this fellow was going way too fast, slammed on his brakes, and did a Dukes of Hazzard into the telephone pole. I drove by right after the accident, and the driver was thankfully unharmed. It’s been a long time since I took physics, and I’m not sure of the torque or velocity or whatever needed to fly over a big ditch and break a telephone pole in half, but I’m sure if he was driving reasonably, it would have been impossible. First world problem, I know, but thanks Mr. Moron!

Anyway, today, I thought I’d share some updates after my first month of selling my practice and not being the boss, along with some other things going on if anyone is interested.

It’s very weird to show up for work in a place you ran for more than a decade and not have any say over anything. I know I wanted to give up ownership and all the responsibilities that go with it, but it’s hard to shut up and just do my job. I’m sure I’ll get more used to it as time goes on.

I had dreams all month that something would happen and I would not get paid rent or my loan payment for financing the business. I guess maybe everyone goes through that when change happens? Anyway, I’m glad to say my fears were unfounded, and I only have many more years to go. Hopefully, my fears will fade with time.

I got another online job that would be boring to most people, but it’s right up my alley. I am doing content evaluation for online health articles. Basically, I read older articles and determine if they are up to snuff or need to be rewritten.  Pay is based totally on production, and I’m averaging about $30 per hour, which is awesome compared to taking jobs in something like retail or service, but much less than I make as an optometrist.  However, I get to do the job in my own time from home, which is awesome. I started on January 21 and have made $600 as of Monday. I think I can easily bring in an extra $1000 per month. Like with any job, especially freelance, I never know when it might go away, so I’m planning on making as much as I can while the gettin’ is good.

Although, this has nothing to do with personal finance, I do want to share two amazing patients I had this week. Sometimes we get hung up on the negative, and I really want to try to remember the good things as well.

Patient one was a lady who was 91 years old. I have to admit, I looked at the schedule and mentally groaned because I assumed she would be slow, hard of hearing, and with altered mental status. I normally like seeing seniors, but I was running behind and had a sinus headache. Much to my surprise and pleasure, this lady was as sharp as most people a half century younger. She was funny and amazingly articulate. I asked what brought her in, and she said working on the computer was becoming difficult with her trifocals! Love it! I wish I’d asked if she was on Twitter.

My absolute favorite patient, though, was an 18 year old. I generally set the bar pretty low. If you are a teenager and can speak in complete sentences, make eye contact, and not wear your pajamas to your eye appointment, I rate that as a positive exam experience. This young lady was as articulate as the 91 year old. She was going to community college to major in psychology. We talked a bit about that as took lots of psychology classes in college. I then asked her what had brought her in today. She replied by saying that she had to tell me a story,

“I went out to breakfast the other day and when I ordered (the menu was on a chalkboard behind the counter), I asked for the special without mushrooms. The waitress looked at me funny and said the special did not come with mushrooms. I put on my friends glasses as a joke and realized the special came with hash browns. I think I might need glasses. “

I have no doubt this young lady will make an excellent psychologist just because of her demeanor and personality. Score one for the youth!

How did you know you needed glasses? Will you be on Twitter at age 91? Any morons get on your nerves this week?