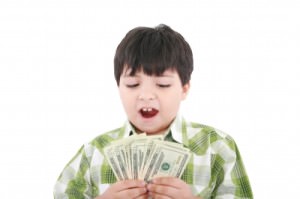 We had a pretty good year at work in 2012, which is great. When you have a business, you want to make money. However, that also means a bigger tax bill.  Because I’m not a fan of handing over money, I’m always on the lookout for legal ways to minimize taxes. I’d already maxed out my employer retirement plan. I put quite a bit into my HSA. It seems like I’ve already done several of the great suggestions Krantcents recently recommended. What else could I do?

My accountant, who has an LL.M. in tax law,  suggested that we hire my daughter. Legally, you can hire kids when they are 7 years old to do basic tasks like filing or cleaning up. My daughter was only five. He told me to set up a photo shoot and use her pictures for advertising purposes. I could then pay her as a model. He said to think of child actors and models in Hollywood and how much they were paid for services. It was perfectly legal, and he said he would go to bat on that any day. Good enough for me.

We did hire a photographer and had a photo session. My business paid our daughter $5000 (she is pretty cute). Since it was earned income, we set up a Roth IRA and put the money there. She can use the contributions for things like college, or it can stay, gathering interest, until she is 59.5 or older. You can do the math on to see that it will be a good chunk of change, and something I would never have though of without the accountant’s suggestion. Thanks, Bruce.

We did withhold taxes. I guess we didn’t have to on that amount, but I’ve never hired a five year old. This was new ground. As a result, our daughter filed a tax return, and got a refund!  The accountant filed it as a courtesy, so I really didn’t think about it until we got two checks in the mail; $224 from the state, and $884 from the fed, made out to our six year old. It was pretty fun to have her sign her name to endorse them.

Well, now we have an extra $1108 that I was not expecting. It can’t be put into the Roth, so we’ve narrowed it down to three options. Since this is technically money meant for our daughter, I want it to be used for her benefit. If we had consumer debt, I’d have no problem using it toward that, as this would benefit the whole family. Luckily, we already crossed that bridge.

I need your help. If you found $1100 to be used in the best interest of a six year old, which option would you choose? Or would you just go and blow it all on a swing set or one of those electric kiddie Hummers?

If you choose the stock option, what is your favorite one right now?