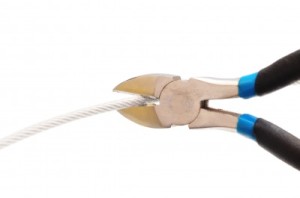 It’s been almost a year since we cancelled our satellite TV. The main reason was to save money. It cost about $70 per month,  but were almost never home to watch it. When we did, it still felt like there was nothing on, we ended up renting a movie. We decided to try three months without our satellite TV to see if we missed it. Guess what? We didn’t, and besides saving money, we have found several hidden benefits from cutting out cable or satellite TV.

The Sound of Silence

Jim and I both grew up in homes where turning the TV on and off were the first and last items of business every day. TV was always on, even if no one was watching. We got used to background noise, and it seemed kind of scary not to have some sort of show going all the time.

In all honestly, once you get used to not having Law and Order or Pawn Stars always blaring in the background, it’s much more relaxing.

We are pretty busy with work and school activities. Many days, the only time all three of us sit down together is for dinner. We used to have some TV show going in the background. You don’t realize how much your attention goes to the TV until you don’t have it on. Now we have much better family conversation where the speaker is the only point of interest in the room.

We Have More Time

Our daughter has become an awesome reader, and she often reads, unprompted, for an hour or more  before bed. Guess what we used to do? Yep, watch TV. Now, we read books, play cards or board games, all the things we never had time for before. It’s amazing how losing TV creates so much more time. I’m not saying cutting out TV will make your child a better reader or give you extra hours in the day, but its amazing much time you can waste when a show catches your eye.

We Have No Idea What Toys and Products are Cool

Since we are no longer bombarded with commercials, we have no clue what things we “need” to make our lives more special. Our daughter has no idea what toys are hot or what cereal is cool to eat. Her favorite is  Rice Chex. I’m sure it would be Frosted Flakes or Cocoa Krispies if we still had commercials.

For her birthday, she asked for a Frozen DVD, a jump rope, and a pair of earmuffs, which seems like an odd list. However, I know these are things she really wanted rather than just what she saw on TV. I also don’t have to see all the latest new cars with 0.9% financing or that Macy’s is having a sale this weekend. I don’t think I’d fall for a product because of a commercial, but who knows how much that affects spending?

I Can Explain Things About Life On My Own Terms

I will never forget when our daughter was almost two and we were watching some stupid reality show. The next thing we know, she’s running around saying “Dammit, Dammit, Dammit!”

I am not naive. I can’t protect my child from the real world. She might grow up swearing like a sailor, but I don’t want that to be my two year old. There are kids in her class that talk about shows that I know are violent, sexually provacative, or just plain inappropriate for first graders. I bet parents don’t even think their kids are paying attention. We didn’t before the Dammit incident.

I always want to have honest conversations and explain what certain words and situations mean. I remember thinking that kissing made you pregnant when I was a small child. I got this from Dallas and Dynasty long before it was time to talk about the birds and bees.

We Get To Choose What to Watch

If you think I’m a teetotaler who dropped TV altogether, you don’t know me very well. I love a good show or movie. I also don’t mind our daughter watching TV. I watched 3+ hours of TV a day when I was a kid. I did other things while TV was on,  but it was always on. I could probably tell you every character from Young and the Restless during the 80’s, and I still turned out OK.

The only difference now is that we choose what we want to watch and when. It doesn’t drone on and on in the background with no purpose. We pick a show when we have time, enjoy it, then turn it off. I never thought there was anything wrong with having TV on 12 hours a day, but now I know that there are better options.

We Save Lots of Money

Money is still a huge motivator to cut cable TV . We bought a year subscription to Netfix on Ebay for $53 and an antenna for $69 to watch network shows. We also have Amazon Prime to avoid Wal Mart, but it comes with lots of movies and TV shows. You can potentially have all the TV you want for under $10 a month! You can’t get ESPN, but it’s not worth an extra $50-$60 a month to us.

Why Do You Pay For TV?

If you have cable or satellite TV, is it because you have evaluated and decided that the expense adds value to your life? If so, then keep it. I’m sure I pay for things others might not see as valuable.

BUT if you are like us and have always had TV just because you grew up with it and never tried life without, I challenge you to give it up for 3 months. You can always have it installed again if you miss it.

You might find that just like satellite radio, driving a new car every few years, or buying clothes every month, things you’ve always spent money on are really not that useful long term. Finally, at 40 years old, I am much happier investing 55% of my income for better things instead of buying stuff that doesn’t really give me happiness. I only wish I’d realized that two decades ago!

Are you willing to give cable a 3 month break? Did you grow up watching too much TV?

Table of Contents
The Sound of Silence
Improved Conversation
We Have More Time
We Have No Idea What Toys and Products are Cool
I Can Explain Things About Life On My Own Terms
We Get To Choose What to Watch
We Save Lots of Money
Why Do You Pay For TV?