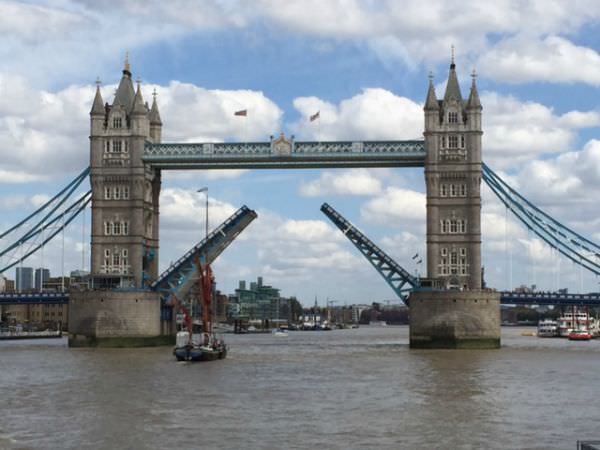 In continuing our tour of Europe, today we’ll be visiting London, one of the most expensive cities on the planet. Even if you don’t normally try to collect points and miles, I would consider them if a trip to England is on your bucket list. The exchange rate is not on the side of the US dollar! Here are some highlights from London.

After taking the train from Edinburgh, we arrived at St. Pancras, which is right beside King’s Cross station where you catch the underground or “tube” as the locals call it. The tube is one of the few cheap things in London. If you’ll be using the underground more than once, the easiest way to pay is with an Oyster card that you scan before and after each ride. We ordered cards ahead of our trip, but they would have been easy to buy at the station. I put £15 on cards for Jim and myself, which covered us for four days in London. Kids under 11 ride free, making the tube tons cheaper than taking a taxi.

Plaza on the River

Up to this point, our hotels had been functional but very cramped and without many amenities. I had originally booked a Hilton in London, similar to our previous places, but when points availability opened up at a Plaza on the River,  a Club Carlson property. I jumped at the chance because of their apartment sized rooms.

Sadly, the deal we booked is not available anymore because Club Carlson took away a huge program benefit that gave the last night free on an award stay. Anyway, I’m glad we got to take advantage because the room was spectacular. We had a great view of the River Thames and were very close to Big Ben and other attractions. There was also a full kitchen and washer/dryer that we put to use almost right away!

Things to do in London

We walked for miles and miles around London and hit almost every major tourist site and then some. The weather was perfect, so that might have contributed to our enjoyment. We thought just about everything was fantastic.

Despite my prior claim that London is very expensive, there are some really cool cheap or free things to do in the city.

Some of our Favorites were Cheap or Free

The National Gallery was completely free and was as good as any museum we visited in Paris. I would advise getting there as the doors open to beat the crowds.

Although you can’t go inside except during very limited times, it’s free to walk around Buckingham Palace,

Parliament, and Big Ben. Changing of the guard is also free to watch, although you have to get there very early to get a good spot at Buckingham Palace. There was almost no one at St. James Place, where we watched a similar ceremony.

One of the coolest places we visited was a last minute addition from Jim. He found out that the Magna Carta is stored at the British Library, so we hopped on the tube to check it out. The library is free, but there is a £12 charge to see the Magna Carta. I didn’t feel it was worth it, so Jim went in and left my daughter and I to explore the library.

In one of the exhibit rooms, we found a ton of treasures including handwritten original works like da Vinci’s diary (with early drawings of eyeball optics!), a letter from Galileo, Handel’s Messiah,  early drafts by Charles Dickens, Jane Austen, and too many others to list. One of the coolest things was also one of the most modern; handwritten lyrics to Help and Yesterday by the Beatles. I had no idea all that stuff was there and it was amazing to see, especially at no charge.

Ripped Off at Harrods

For the attractions that did charge admission, we bought a three day London Pass. I think we came out a few dollars ahead, but the real bonus was being able to skip lines at places like Westminster Abbey and the Tower of London. I’d say it saved us a few hours of waiting around, worth quite a bit in my book.

The only thing in London that I didn’t enjoy was Harrods Department Store. I should have listened to Rick Steves description which was something to the effect of a huge, overpriced, crowded place full of Asian and Middle Eastern tourists. That was pretty much spot on. There was actually a designer kids section with little bitty Dior, Prada, and many designers I’d never heard of, and it was packed!

We made the mistake of letting our daughter see and then being stupid enough to eat at the Disney Cafe inside Harrods. With the exchange rate, it came out to about $70 for three plates of pasta. Bottled water was £5 and smoothies were £3. Jim ordered a smoothie and I asked for tap water, which they never brought. His “smoothie” turned out to be a miniature version of a kid’s drink box. I shared a bottle of water with my daughter that we had in a backpack. Not our finest moment, and we had to eat at Subway for the next couple of meals to get back on budget. Live and learn!

Despite the price tag, I would go back to London in a heart beat. Just accept that some things will cost money and make sure to balance it out with cheaper alternatives.

What would you most like to see in London? Have you ever paid too much for a crappy meal?