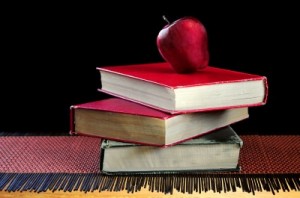 In the personal finance community, view points often lean toward toward self employment, multiple side hustles, and even early retirement. We often pity those who remain in a regular 9-5 job for several decades. “Regular jobs” are often a means to an end, and there is little sense of loyalty. Today, I’ll share a different view point.

What if a person does want a steady job for the long haul that includes benefits, paid time off and the holy grail of retirement, a pension! There are few careers left that offer these terms, but I happen to be in the know about one of them. Teaching is a profession we usually think of as hard work with low pay, and I would have to agree, but  there are some upsides.Let’s look at how much teachers really make.

Aren’t You An Optometrist?

That’s right. I am not a teacher. I have no desire to be a teacher. I’d almost rather be trapped in a room full of spiders than small children, but I have been married to a teacher for the past 12 years. I was with him from his first job on, so I think that gives me insider knowledge that the average optometrist would not have . I would even say that qualifies me as an expert witness to the pros and cons of being a teacher.

How Much is a Teacher’s Salary?

Just like any job, salary varies dramatically depending on location and years of experience. I think it’s fitting for this post that we live in one of the lowest paying school districts in Colorado. Surrounding districts generally pay teachers at least $10,000 more per year. If you can make it on a teacher’s salary here, you can do it just about anywhere. I also have no idea about private schools.  This post is based only on our experience. Other districts may be different.

One good and bad thing about teaching is that your salary is set. If you have x amount of years and x amount of education, you get x amount of dollars. You can view your expected salary and raises on the school’s website for the duration of your career. Salary is often adjusted for cost of living increases, but if you want to plan, it’s pretty easy.

Teachers top out at $54,337 if they have a master’s degree plus 45 or more extra hours of continuing education credits AND have worked for 25 years. If you never get a master’s, you’ll top out at $36,171.

That Much Education For So Little Pay?

I don’t know of a ton of careers outside of education that require 6 or 7 years of college but top out at such a low point. It almost makes me wonder why anyone goes into teaching, but before we write it off completely, let’s look at other ways teachers are compensated.

Teachers have some of the best health insurance, hands down. I often hear teachers complaining about a copay or having to pay something out of pocket, and I want to strangle them. Jim’s health insurance has a $40 copay for doctor visits, plus a $1000 deductible if he has to have surgery or go into the hospital. For generic medicines, the copay is $5, and for brand, the most you’ll pay is $40. All this goodness costs nothing. I’m not sure if all school districts fund insurance entirely, but ours does. If he could even find a plan this good on the exchange, it would probably be at least $600 a month. They also offer vision and dental coverage for reasonable costs. Coming from someone who has an $11,000 deductible before my insurance pays a dime, this seems pretty sweet.

Teachers work on a 9 month contract. That’s three months off per year, two weeks at Christmas, a week at both Thanksgiving and spring break, plus a handful of other holidays. When is the last time you had President’s Day or Martin Luther King Day off? If you looked at the entry salary as being paid for 9 months of work, that equates to $3250 per month. It’s just spread into 12 paychecks instead of 9. Those months off in the summer offer an opportunity to work a second job to earn more money if the teacher salary is not enough.

Teachers also get a truckload of sick days. I believe Jim started with 10 per year, plus two personal days. He has never taken that many days off, so it carries over to the next year. I’ve known teachers who have been able to retire a couple of years early because they had so much accumulated sick time.

There is a probationary period for new teachers. I believe it was 3 years for Jim. During that time, your contract might not be renewed if you suck at teaching or if the school has to eliminate a position. After that, it’s really hard to get fired outside of doing something illegal. If you get an extended illness or take a year of maternity leave, your job will be waiting when you go back. The bad teachers sometimes get moved to less desirable positions, but they don’t get fired. I’m sure there are exceptions, but this seems to be the case based on what we’ve seen over the years.

What are the Cons?

Teaching is thankless work. You work your butt off every day to try and get through to a room full of children who are often indifferent at best. The respect that teachers received from students and parents back in my school days is long gone. Many parents love to blame all their children’s problems on the teacher.

You are also at the mercy of the state and local governments. The reason our teachers get paid so poorly is that the community will not support a tax increase to raise teacher salaries. The state has also cut the education budget tremendously since 2008. From 2008 to 2012, teachers here did not get their annual raises and had to take furlough days. That adds four extra years before hitting the top salary and being able to retire on schedule.

Teachers in Colorado do not pay into social security, so if you quit before retirement age and have not saved independently, you’ll get nothing in retirement.

Perhaps the best reason to go into teaching is the retirement benefits. Yes, the state could go broke or Armageddon could occur, but even during the worst of the last recession, retired teachers still got their pension checks. Retirement depends on the age when you start teaching, but you can generally retire if you are over 50 and have put in 25 years. Annual pension amount is based on the average of your three highest salary years throughout your career, and there is a calculator online to figure out what you can expect. For that topped out teacher with the master’s, the annual pension is $33,960 with a 2% cost of living increase each year.

If you worked in a traditional job, you’d have to invest around $825,000 to withdraw that much annually. That’s a pretty good reason to stick with it for 25 years!

If you’ve heard the saying that people do not go into teaching for the money, it’s 100% correct. I’ve never heard one teacher say they signed up for the retirement and health insurance. You go into it hoping that you can educate and help children move into the world of being productive adults.

There are tons of examples of where it does not work out, but for those times when it does all fall into place and you can influence a young mind in a positive way, it’s worth all the money in the world. Do you remember a favorite teacher who believed in you? I have one in mind who always pushed and believed in me more than I believed in myself sometimes. Making that connection is truly priceless.

Would you work in a low paying job for 25 years if it meant a steady retirement?  Did you have a teacher who made an impact on you?

Table of Contents
Aren’t You An Optometrist?
How Much is a Teacher’s Salary?
That Much Education For So Little Pay?
Health Care
Paid Time Off
Job Security
What are the Cons?
Retirement
The Real Reason People Teach