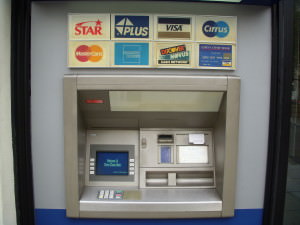 I noticed an error in my bank statement last month. It wasn’t  gigantic, and it certainly wasn’t in my favor. It was actually pretty piddly, $2.50, for an ATM fee. I kind of hemmed and hawed about it, but ultimately I called to have it fixed. I felt sort of like a complainer, but it was an error that did cost me money, even though that amount isn’t going to make or break anything. It made me wonder when does being vigilant with your finances turn into obsessiveness?

While I do have an online savings account, I really like my local bank for many reasons.  It isn’t a part of a huge chain, all the tellers know me, and they are the only bank in town that offers a HSA account. My checking account that I use for paying bills has no fees if I use my debit card  so many times a month, have my paycheck direct deposited, and get e-statements. If I meet those requirements, I also get any ATM fees reimbursed and draw a pitiful, tiny bit of interest. Since I’ve been taking a cash allowance with my new budget, I usually make one withdrawal from the ATM per month. I haven’t worried if the ATM wasn’t through my bank, because I knew my fees would be refunded, except for last month. After a couple of phone calls, I got the $2.50 back. My total time spent was maybe 5 minutes to get back the $2.50, which equates to $30 per hour. Not too bad, but what if I’d had to spend an hour to get the money back?

How much money can you save?

I am a big proponent of making calls to lower your monthly bills. There is so much competition  that companies will often lower your rate to keep you as a customer. In the past 6 months I’ve been able to cut $15/ month from my satellite TV bill, and $20/ month from my internet bill just by calling to ask for a better rate. Crystal at BFS just got her car insurance lowered by almost half by calling. If making calls will save you a few hundred dollars a year, it’s worth it every time, even if you do have to press 1 for English, 2 for billing, and then listen to elevator music for a half hour.

Just for the good of man

Sometimes we don’t pay attention or get tricked into paying fees we didn’t mean to pay. It often is very difficult to get that money back, but I think it’s worth the time if you feel a moral obligation to right a wrong. For example, if you remember last month where my brain didn’t work, and I accidentally found a shyster website that was made to look like the site for renewing you driver’s license. I paid $14 for this scam of a site to direct me to the real site. I didn’t know it until the charge showed up on my credit card. I probably spent two and a half hours taking steps to get my money back. I’m happy to say the that $14 was credited back to my account this month. Per hour, I received about $2.60 for my efforts. It wasn’t a good use of my time, but I felt a moral obligation not to let these people keep my money.

I don’t think I’ve crossed the line into obsessiveness yet. Maybe I shouldn’t have worried about the $2.50, but that’s two Redbox rentals, two fountain sodas, or an ice cream cone for my daughter. I could actually receive a product for that money other than just losing it forever in the form of a fee. I know people who make much less money than us who never question fees much larger than this. I bet lots of people never even take the time to set up a bank account so there aren’t fees. I think the point is to be vigilant but know when to let things go as well. If it’s a lost cause, chalk it up to experience, but always pay attention. The little fees or price increases today could turn into thousands of dollars over the long term.

What’s the smallest amount of money you’ve ever spent time trying to get back? Am I crazy to worry over $2.50?