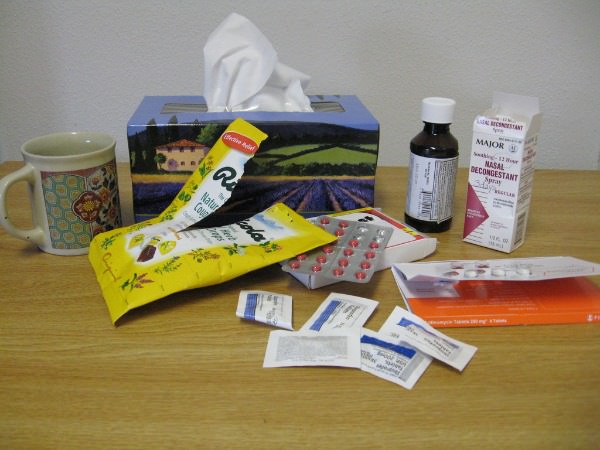 It’s really difficult to function when you’re sick. I know because over the past three weeks, our home has been a revolving door of illness. Even if you are lucky enough to have paid time off at work, there is no way to take off that much time without a loss of income. Is there a best way to get things done when you’re under the weather? I’m not sure, but here’s how we’ve been surviving.

Get the Most Important Things Done Early

This might not apply if you have to spend 8 hours a day in the office, but if you have flexibility at work, try getting the most important or most difficult things done early. That way if you have to leave early or are down for the count in the afternoon, at least you will have accomplished something.

Although I know it did nothing for my popularity, I had to back out of school and social commitments over the past couple of weeks. I’m not naturally social so I usually do make an effort to avoid becoming a hermit. However, there is no need to spend extra energy on school spirit or socializing when you’re sick.

When we don’t want to burden others with our problems, it’s difficult to admit the need for help. But most employers, coworkers, and clients would prefer lending a helping hand or at least extending deadlines until you’re back in fighting form. I would rather have something done correctly, even if it means taking extra time, over a 50% effort.

Take Advantage of Home Remedies and Listen to Your Body

Chicken soup, hot tea, vitamin C, Vaporub; home remedies do help with a variety of cold and flu symptoms. My new best friend is a Personal Steam Inhaler! Even if you are person who subsists on kale and quinoa, it’s OK to go with whatever cravings pop up while fighting a cold. I never want fast food except sometimes when I’m sick. I think it’s my body’s way of telling me it needs fat and calories.

Sleep is also a high priority when you’re trying to shake an illness. Don’t be polite. Kick the hubby into the guest room if you need to and let kids fend for themselves if they are able. Also, don’t get sucked into social media, laundry, or trying to do one more thing when you know you should sleep. The world won’t stop turning if you go to bed at 8 PM.

Know When to Throw in the Towel

Sadly, we all fought our colds for the over a week to watch them turn into sinus infections or constant, hacking coughs. That meant a round of antibiotics for each of us. Yes, it takes time and money to go to the doctor, but the expense was much better than having lingering illness for weeks. I’ve known many people who’ve try to live with chronic sinus infections to the point of eventually needing surgery.

Don’t run to Urgent Care after the first sneeze, but if you aren’t genuinely feeling better after 10 days or if you got better for a couple of days then had a relapse, you probably need prescription strength help.

No one enjoys being sick, but since average adults have 2-3 colds per year, we all have to deal. If you don’t have the luxury of going to bed for 7-10 days, then hopefully these tricks will improve efforts to function when you’re sick. I only hope we’ve paid our dues and will have a healthy holiday season.

How do you get things done when you’re sick? What is your favorite home remedy?