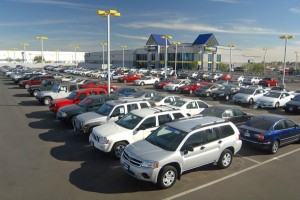 Hopefully this will be my last post about used cars for a while. Like it or not, most of us have to drive, which means the occasional need to shop for a car. Since one of our lines in the sand is to never again buy a brand new car or have a car payment, it made the hunt a bit more challenging, but I think the end result turned out well. Let me say that I hate haggling. It’s more fun to pick up dog poo, but sometimes you have to step up to the plate if it means saving thousands of dollars. These are some tricks I used to haggle for a used car.

Know What Kind Of Car You Want

There are so many makes and models of cars available that it almost boggles the mind. Saying you want a car just doesn’t cut it. Thankfully the internet has all kinds of reviews and specifications so people can check out vehicles that fit their needs for reliability and affordability.

In our case, we narrowed the choices to a Honda Civic or Accord. We also wanted a 2010 or newer model. I preferred the Accord since it’s the same size as the car we have now, but I wasn’t ruling out a Civic if it was a better deal.

After looking at Edmunds, Kelley Blue Book, Craig’s List, eBay, and Autotrader, we had a pretty good idea about price ranges. Knowledge is power when dealing with sales people!

Decide How To Buy Your Car

Today, buyers have options for buying a used car. You can go the traditional route at a dealership or search numerous vehicles online. We decided not to buy sight unseen so that ruled out eBay. Since there were no listings on Craig’s List that were under 3 hours away, it was the dealership route for us.

Make Sure To Visit More Than One Dealership

I got most of this information straight off Edmunds.com, and it worked like a charm. I went to two different car lots on the same day and test drove three Civics and one Accord, all either 2011 or 2012 models. I made sure the salesmen at each place knew I was comparing prices at other dealerships as well.

Try To Make The Salesman Name The First Price

I had read that it’s much better if the salesman throws out the first price, so I did not mention a budget or price range, but did say that cost would be a big factor in my decision. The first salesman gave me prices on all three models that I drove. He also mentioned that he only needed one more sale to meet his monthly goal. I don’t know if shopping toward the end of the month guarantees a better deal, but I do think it helped in my case.

The finance manager also came out to discuss the option of payments, but I said nope. I thanked them both and went on my way to the other dealership. They were anxious to make a deal, but I felt no pressure to decide on the spot.

Be Cool Under Pressure

Where the first salesman was very laid back, the second one was super aggressive. I test drove a Civic that was actually priced better than the ones at the first dealer. This time, they did not want me to leave without buying.  I was tag teamed by the salesman and the finance manager, who pretty much told me I was crazy to pay in cash when interest rates were so low. They also ended up taking $2500 off the list price, but I felt so uncomfortable that my knee jerk reaction was to get out of there as fast as possible. I can’t believe high pressure sales pitches ever work, but they must or else no one would own time shares.

Don’t Buy Without Leaving The Lot

One of my rules for the day was to not buy anything without leaving the lot. I felt the aggressive dealership was already at rock bottom, but I hoped the laid back one would lower their prices.

Sure enough, that evening, I got a call from the first salesman. I told him the Civic at the other place was less expensive, but I still wasn’t sure which car we wanted. He offered to knock $1100 off the price he had quoted for the Accord. The numbers were pretty good, and while I was tempted to just say yes, I told him I needed a day to think about it.

As I expected, the aggressive dealer didn’t lower their price further. I’m not sure if it was their sales tactics or our true preference for more room, but Jim and I decided to go for the Accord. Once again, he was out of town, so it was up to me to close the deal. Between this car and our rental property, I’m getting really good at this haggling stuff!

The laid back salesman called me the following morning to see where we stood. I told him I would take the Accord if he could come down another $500. I didnt’ figure it would happen, but what’s the harm in trying? It’s also much easier to do over the phone than in person. I was polite and funny. I don’t like to deal with people who aren’t nice, and I don’t believe being rude or condescending ever wins points with sales people.

While the price didn’t come down $500, he did lower it by another $100, and I said OK. Perhaps we could have gotten a few more dollars off, but at this point, my head was about to explode and I was done negotiating. Plus, Jim’s parents are sitting around without any transportation other than my sister in law. That situation is not our fault, but we feel bad and need to get this over with so we can get back to focusing on our own lives.

Car Shopping With a Plan

I think the key to car shopping from a dealer is to know the value of what you want to buy and have a line in the sand. It’s easy to get talked into anything in high pressure situations. Don’t get caught up in the moment, always be polite, and walk away at least once.

I’m hoping our new to us car lasts for at least the next decade. It will take me that long to work up the motivation to car shop again!

What’s the best deal you’ve haggled for? Have you ever fallen for an aggressive sales tactic?