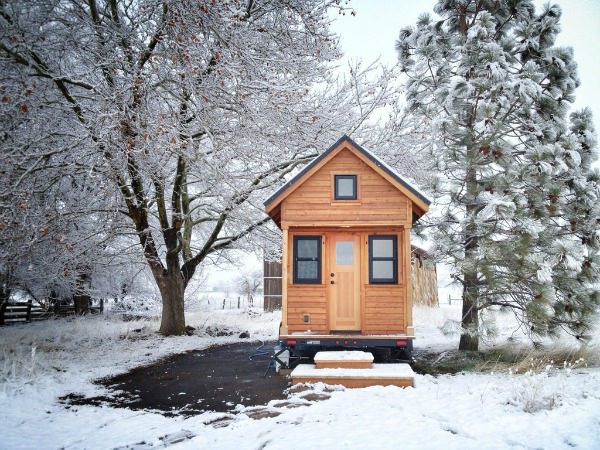 We’ve all heard the expression, “Talk the Talk or Walk the Walk”, meaning that sometimes people talk a really good game but often don’t follow through with any action It’s very easy to say what sounds the best, but the hard part comes when an actual decision has to be made to achieve results, especially if you haven’t been honest with yourself before starting the talk.

One of my favorite things to do when we stay in hotels is watch HGTV, the only real thing I miss since cutting the cord. As it turns out on a recent weekend trip, they were doing back to back episodes of Tiny House Builders, a show where people trade in traditional housing to live in super small, portable, tiny houses.

The couple in one of the episodes wanted to build a tiny house as a way to inflict less of a footprint on the world and to minimize the need for consumerism in their lives. Noble causes indeed, until they ran into some snags.

Many tiny homes are made with pine or cedar shingles because of their light weight, but the couple on HGTV chose to go with reclaimed barn wood. It was environmentally friendly but added tremendous bulk to their home. Because of the weight, their current truck could not haul the house. Instead of changing to a lighter material, the couple chose to buy a bigger truck. In fact, the truck they purchased was more than double the cost of the house.

Now, I am not criticizing this couple for using barn wood or buying a truck. Obviously, the look of their house was more important to them than having it be mobile enough to work with what they already had. There is nothing wrong with building your house the way you want. But why didn’t they express this going in? To say you want to minimize your footprint and decrease consumerism only to buy an enormous, expensive, gas guzzling vehicle is not walking the walk.

Be Careful About Rationalizing

I used to rationalize the huge amount of stuff we bought on a monthly basis. It was either on sale or something we would get great value from. I rationalized right into $30,000 of credit card debt, and I’m not alone. It’s possible to come up with a plausible reason for just about anything.

And on and on and on. It’s all just talk to hide the fact that we feel the need to justify our spending.

There are multiple reasons:

After fighting to get out of debt, I sometimes have a hard time parting with money. I felt bad about buying new work clothes recently, even when my two best pair of work pants had a broken zipper and a ragged hemline.

I won’t lie. Part of that is because of this blog and what other people would do better in my situation. This can be a good or bad thing. While it’s important to be mindful about spending, you really don’t have to justify financial decisions to anyone other than yourself.

Obviously, it’s not OK to blow money right and left when you don’t have enough to cover the bills, but when you have control of your finances and know there is plenty of money for buying new work pants or even a new truck to haul your tiny house, it’s OK.

I think many personal finance people gasp and moan when we see people spending money in ways we wouldn’t consider necessary, but the whole point of personal finance is that it’s personal. What I value might not mean much to you and vice versa.

The most important thing is knowing what is important and having a plan to make it possible. Otherwise known as walking the walk. Once you have goals and plans, you can stop talking and actually get things done. You really never need to apologize, even if you decide to buy a Ford F-8000000 mega hauling truck!

Do you think people need to explain why for every purchase? Could you live in a tiny house?