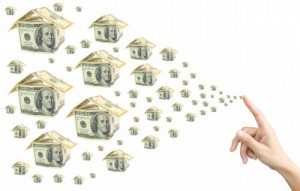 A big reason many people put off investing is debt. It doesn’t really make sense to ramp up investments while paying 21 percent interest to credit card companies, but what about low interest debt? Obviously the answer depends on many variables including income, how much debt you owe, and if you are investing for short or long term goals.

We currently have lots of mortgage debt, mostly from investment properties, that we’d like to see paid off quickly. However, we don’t want to miss out on investment gains and compound interest either. Is is better to invest or be debt free?

Assuming we maintain our current level of income and expenses, if we were to stop investing in our 401k’s, IRA’s, and taxable brokerage accounts and put all the money toward paying down mortgage debt, our primary home could be paid off in about three years. The commercial building we own will be paid off in a little over four years. At that point, we could throw everything toward the other rental house and four plex, paying those off in another two or three years.

If we went for that strategy, we would own six rental units and our own home outright. Monthly expenses would drop dramatically. Rental income would produce a conservative profit of around $5500 per month. That means that if we sacrifice all investments besides paying off mortgage debt for the next six or seven years, we would get an automatic return of 3.25%-4.75% (mortgage rates) plus have a pretty sweet amount of semi-passive income.

Missing Out On Investment Income

If we did stop investing in the stock market, we lose interest and dividends, plus our income tax bill would go up. In fact, with our current tax bracket, that strategy sends somewhere around $10,000 a year to Uncle Sam.

You can’t really guarantee a rate of return on stock investments, but if we assume an average return of 8% and also assume we invest the same amount as last year for the next six years, we’d be missing out on just over $100,000 in interest!

That being said, 2014 was a banner year for us as far as investing. I don’t believe this year will be nearly as good. Still, you can’t argue with the power of compound interest.

I don’t know that there is a right or wrong answer. I don’t think it’s a bad idea to laser focus on one money goal while neglecting other parts of the financial picture, especially if that goal is paying off high interest debt. It’s a bit more gray when the debt has low interest rates. Math says to always put money where it earns the highest rate of return, but emotionally, paying off any debt sometimes wins out, especially if it means more career freedom or the ability to improve quality of life.

I think for now, we’ll keep investing as much as we can in the stock market and let our tenants pay off the mortgages, even though a big part of me is salivating at the thought of owning real estate outright. It will take longer for us to be completely debt free, but that’s a first world problem I’m OK to live with.

Would you sacrifice investing to pay off a low interest debt quickly? Do you think mortgage debt is good debt?