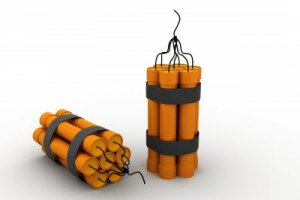 I read an article earlier this week about a couple who paid off $92,000 in debt in less than three years. As with many articles like this, it was featured on Yahoo Finance, the all star team for trolls.

Once I got into the post, I was amazed to find that the couple who paid off this massive debt were both teachers from Tennessee. They achieved their goals by cutting back as much as possible and earning extra income, a tried and true formula anyone can use to get out of debt, even teachers! I could not think of a negative thing to say about this couple. I thought that maybe even the Yahoo trolls might have mostly good things to say. Alas, I was wrong.

As I was reading through the comments, some made me laugh, some were totally irrelevant, and to be fair, more than a few were positive. As a fun Friday exercise, I wanted to bring some Kryptonite to the Yahoo Trolls* today and blow all their whiney excuses out of the water. I’ve listed some real comments from the trolls for your enjoyment.

Stop Looking For The Easy Way Out

“But having two secure incomes really helps. As teachers, working in a Title I school, their student loans could have been forgiven.”

Yes, troll,  two teacher salaries are amazing! They likely pull in what a manager at Wendy’s makes. While it’s true that student loans can be forgiven for people working in certain public sectors, elementary teachers and band directors, like this couple, do not qualify. Hard work is the name of the game so please don’t undermine their efforts.

“Sounds good but keep in mind they had no social life. I am not certain how freeing that is?? It seems to me that it would be the opposite?? There is nothing wrong with being frugal as long as you are generous in spirit. I understand controlling your debt and not overspending but there is nothing worse than friends who expect everyone else to fund everything. No one on their death bed says “I am so glad I don’t have any debt”.

Maybe I’m weird, but not having any debt would certainly be something I’d be thankful for on my death bed because that would mean I didn’t have to work until I dropped. I believe this troll is confused by the quote about no one on their death bed wishing they had worked more.

Plus, if this troll had actually read the article, the couple clearly said that they avoided almost all social situations that required money unless they had gift cards. They did not keep living it up while mooching off their friends. Contrary to popular believe, you can have a social life without spending a ton of money. You just might have to avoid friends and family who don’t subscribe to that belief.

“I really hate these articles. Two teachers that work 9 months of the year and can elect to get all their income in single payments (I bet most don’t know teachers can get paid that way) plus using second jobs to live off of. This is NOT how average people can pay off debt. I bet their incomes was around $45k or higher for her and $45 or higher for him with base salaries from the schools. Then if they both had second jobs around $10/hour they would have another $40k. I’m not impressed. This is not AVERAGE Americans.”

This troll is absolutely right. Most “average” Americans will always have debt and won’t look for side income to accelerate their goals. That does not mean it’s impossible to be debt free. In fact, it’s very doable if you want to spend free time earning income instead of leaving negative comments on Yahoo.

You Don’t Need Debt To Have A Good Credit Score

“This young couple decided to do away with all debt…good luck at the bank when you don’t have anything on your credit report to show you can make on time monthly payments.”

While it is true that making on time monthly payments will raise your credit score, this troll is wrong that you have to be in debt to have a high score. If you have decided to do away with all debt, that means saving in cash for any purchase going forward, in which case, a credit score is irrelevant.

One of the future goals for this couple was to buy a house. If a mortgage is in their plan, they could use a credit card for normal expenses and pay off the balance in full every month. This will increase their score without debt.

“If I were still single I could easily adjust my lifestyle to spend less, reduce debt, etc… I mean I could eat bologna and ramen noodles and spend nothing on entertainment no problem if I was by myself. But it’s much harder once you have a wife and kids and they’re on facebook every day complaining about the trips everyone is going on, the clothes and gadgets everyone has, etc.”

Dear troll, I agree it is much harder and takes longer to pay off debt when you have a family. Just this week, my daughter demolished her snow boots and got a last minute invite to a birthday party. Yes, I could make her have soggy feet and never attend birthday parties, but I won’t.

Those are the sort of unexpected expenses you sign up for when you have children. If you’re smart, you’ll pick up snow boots at the end of the season for next year and have a stash of birthday appropriate presents picked from regifts or sales. If you’re not, you’ll have to shell out at the last minute, and that is tough on a budget.

If it’s too hard for you to look on Facebook and see what everyone else has, then stop looking. If don’t you want your kids to be broke grown ups, then stop keeping up with the Joneses. As we’ve established many times, the Joneses are up to their eyeballs in debt.

Start spending time together as a family and enjoy things that don’t cost money. Would you rather have new clothes and gadgets now or be able to help your kids with college or a down payment on a house later on? You are the parent and you get to decide, no matter how hard your kids try to tell you otherwise. Trust me, they will say thanks when you have enough money to support yourself in retirement and don’t have to live in their basement.

Paying Off Debt Is Hard Work

It doesn’t matter what your income, gender, career, family size, or hair color is, it’s hard to pay off debt. Anyone who is able to do so should be congratulated, not picked apart by trolls. If I could ask one question of all the negative people out there it would be this,

What are you doing today to make your situation better? And no, leaving mean comments or making excuses does not count.

Is there anything Yahoo Trolls would not find fault with? How do you deal with your critics?

*(I love the name Yahoo Trolls and if I could play music, I’d start a band called that.)

Table of Contents
Stop Looking For The Easy Way Out
Death Bed Confessionals?
Haters Gonna Hate
You Don’t Need Debt To Have A Good Credit Score
Having a Family Does Not Grant A License To Be In Debt
Paying Off Debt Is Hard Work