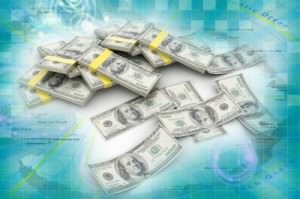 In a world of ever shrinking guaranteed retirement benefits, how much would we really need to feel secure about our long term financial stability. I used to think having a million dollars would make me rich. When your reach that milestone, you get to belong to a new club, the millionaire’s club. Millionaires lead the luxury life we all dream of right? If you were given a million dollars tomorrow, would it make you rich?

Becoming rich by having a million dollars depends on several things.

How Much Debt You Have

Having a million dollars would not have gone very far for us about a decade ago. With a residential and commercial mortgage, business loan, student loans, auto loans, and consumer debt, we were almost $750,000 in the red. A cool million would have paid that off and left us a nice chunk of change to build on, but I wouldn’t have considered us rich.

Will You Ever Earn Any More Money?

If someone gave me a million dollars today, tax free, and I never worked again, lets see what sort of lifestyle that would allow.

I’ll hide it under my mattress because I don’t trust those evil financial planners, and I think the stock market is too scary. I’m almost 40, so let’s say I’m planning on living to age 80. That leaves me a handsome $25,000 a year to live on. For that amount, I could eat lots of rice and beans and maybe have a steak on my birthday if I hit the early bird special at Shoney’s. I’m not feeling very rich.

If I ignore the lifestyle inflation that must come along with belonging to the millionaire’s club and continue to work as I do now, I can invest that million dollars. If I can earn 6%, and leave the million there for another 20 years, I would have just over $3.2 million dollars beginning at age 60. You can play with rates of return and amounts of time, but if I don’t go hog wild with my million dollars, I’ll feel pretty rich in 20 years.

Is A Million Dollars Enough?

If I asked most people that I interact with on a daily basis, I think the answer would be that a million dollars is enough to make you rich. The thought of seeing all those zeros in your bank account would be amazing, but the reality is that the money might not get you very far if you don’t use it wisely. It would also be a rare fluke for most of us to get a million dollars given to us as a lump sum, so the point of this post is probably pointless.

Before you berate yourself for going through this whole exercise, I would challenge you that anyone can be a millionaire. Yes, it’s true. You don’t have to be born with a silver spoon in your mouth or win the lottery. Anyone who can invest $508 dollars a month with a 6% return for 40 years will be a millionaire. Obviously, you’ll have to invest more if 40 years doesn’t fit your time frame, but you can’t argue with the math.

Why Most People Will Never Have a Million Dollars

If everyone started investing their $508 a month as soon as they had their first real job, I bet most would never miss it. The problem is that we rack up all kinds of debt before getting that job or we start filling our lives with things we don’t really need when the paychecks start to roll in. It’s hard to catch up if you put it off for “one more year” or “until I get xyz paid off”. What would happen if we fit our lifestyles around what was left over after we made sure we’d be millionaires?

Whether you think a million dollars makes you rich or not, I’m sure most of us would like to attain or surpass that number. Money certainly doesn’t buy happiness, but it does make life lots more comfortable and stress free.

Do you think a million dollars makes you rich? Do you agree that anyone can be a millionaire?