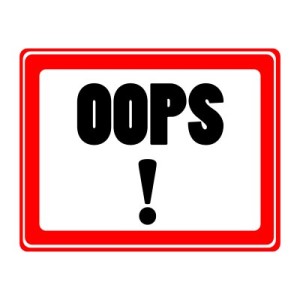 I have certainly made my share of financial mistakes from running up credit card debt to spending student loan money on an iguana, but I think after all those mistakes, I’ve finally learned how to stay out of debt. However, I see people every day who are still struggling with the same money problems we used to. There are some key mistakes that can sneak upon anyone trying to beat the cycle of debt.

Taking Out Loans After Paying Off Large Amounts of Debt

We knew another family that were going through some of the issues we were during our massive credit card debt payoff. We used to all hang out and play musical credit cards, charging whatever and whenever we liked. Jim and I had our wake up call after seeing family really struggle after losing a house to foreclosure. Our friends lost a job during the great recession. The husband worked in a sales job while the wife stayed home with the kids. Since they had no emergency fund, things got pretty tight. Eventually, they made some tough decisions, which included selling a really nice house that was keeping them house poor. They moved into a small rental. The wife took a job. The husband found a more stable job that he didn’t like as much, but they were able to pay off debt and get back on track financially.  Until they bought a new car. Never mind that they had two paid off vehicles that ran just fine. They wanted a new car, and convinced themselves that taking out a car loan was a good idea. Now they are back into the monthly payment game.

I’m not picking on my friends. Jim and I paid off our credit cards a couple of times over the years only to run them back up again. Until you get to the point of knowing that monthly payments for consumer debt do not have to be your life, you are at a huge risk for falling back into debt.

Not Having an Emergency Fund

Even with the new car purchase, our friends seemed to be doing well. Last year, they were able to buy a house  better suited to their income. Home ownership is the American dream after all,  but then the husband quit his steady job to go back into sales. The sad thing is that this family still does not have enough in savings to make it through one month of expenses. The wife is still working, but her salary is a fraction of what the husband makes.

I think life is too short to work in a job that you hate, however, you can’t just jump ship when the mood hits. If he wants to make a career in sales, I think that’s a great plan, but he should have remembered what happened the last time the economy went south. Now there is a new house payment, a new car payment, and a paycheck that is not dependable. I can only hope things go better on the job front this time. Even if it takes a long time to save up, I think you need at least six months of living expenses  in the bank before you leave a steady job for the unknown. Being able to borrow from your retirement plan does not count. That’s certainly not the YOLO philosophy, but not being able to pay your bills is not the kind of exciting I’m looking for.

I had a patient not too long ago who lost a job in social work. She decided to go back to school to get a master’s thinking she’d have a better chance at a higher paying job. She got the degree online, which was convenient, but very expensive. Now she has a master’s in social work, no job, and a sack of student loans. It’s amazing the things people tell you during an eye appointment!

Furthering your education can be  great way to move up the career ladder, but you need to know that it will be a help in your profession before you take out student loans. In this lady’s case, even with a master’s in social work, the top salary does not warrant what she spent on an expensive degree. Taking classes at a state school might have meant driving and time away from home, but it would have saved thousands of dollars. It also hurts that we live in a small town with limited job openings. If you know you don’t want to move for work, then find something that you can do in your area.

These are three of the mistakes I’ve seen personally that keep people in debt. I’m certainly not perfect, but I’ve learned that having savings and not allowing  ourselves to buy something  we can’t pay for right away is what is going to keep us out of debt forever. It only took a decade to realize this, so hopefully you’ll take my advice to avoid your own mistakes.

What debt mistakes do you see people making every day? Would you stay in a job you hated to pay the bills?