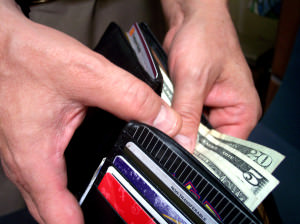 Have you ever had one of those months when your brain seems to stop working, not just once, but over and over again. It’s kind of like when you’re late and then you get behind a school bus AND a tractor on your way to work. This past year I have been tireless in tracking our finances, especially since starting this blog in August. I don’t want to let any of you fabulous readers down. I know you seek me out each week to receive five star financial advice .However, I really blew it this month. Not once, not twice, not thrice, but four times. Yes, I goofed and had to pay the price with four stupid fees. Because I have no shame, I’ll share my mistakes. Maybe it will remind you be more vigilant so that hidden fees don’t come after you.

Since I had a birthday last month, I had to renew my driver’s license. I would rather have my bottom teeth pulled out than sit at the DMV office, so I checked online. Sure enough, in Colorado, you can renew your license over the internet if you meet certain qualifications. I clicked on what I thought was the Colorado DMV website. It looked like a state website. It asked me some questions, name, driver’s license number, etc. It said I was eligible to renew online and asked for my credit card information. Score, no DMV for me.

The fee was $14, which I though was reasonable. I hit submit, then it sent me to another link where I had to fill in the same information. Seemed redundant, but it is the government. Next it said my fee was $24. OK, what changed? I went ahead thinking maybe they didn’t have all of the information the first time, plus I was really tired, and it was past my bedtime.

A couple of weeks later, my new license arrived in the mail. WooHoo! Then, I got my credit card statement.  I had the charge to the state of Colorado for $24 and there was a $14 charge to another service called driverslicense.org. I called the DMV and apparently this other company mimics the state website so that you will pay them to direct you to the correct government website. I went back to the site I had thought was the DMV, and sure enough, at the bottom of the page it said that this was a for profit site. I didn’t pay enough attention and was duped. I called to ask for a refund, and they don’t have people who answer the phone. They did have a menu option for refund of services, so I am hopeful I can get my $14 back, but it is probably lost to stupidity. If you are doing anything similar , make sure your are on the correct website, and do it in the morning when you are well rested!

On the same credit card statement, I noticed a charge to Equifax, the credit reporting company, for $149. I totally forgot that I signed up for a credit monitoring program when we were paying off our credit card debt. I guess our year promotion had run out and now I was getting charged. I called right away to cancel, but I’m sure I will still get charged for the amount of time from when the charge went on the card until I called to cancel. We’ll ball park $10. If you sign up for some offer that has a promotional period, make a note of the date, so you can cancel BEFORE you get the charge. Poor planning on my part.

For our rental property, the water and sewer bill used be through the city on one bill, which went to our tenants. The sanitation district and the city got into some disagreement, and the sanitation people decided to do their own billing. They will only bill the property owner, not the tenant. As a result, we are now paying the $30 a month sewer bill, which is OK. Our property still cash flows, but it is a bummer. In the future, we can add it to the rent, but we can’t change the lease to include it mid- stream. Anyway, the address recently changed, and my husband didn’t catch it. We do all payment through auto billing, and he just sent it to the old address.

When we got the bill this month, it said our last payment was not received. We were confused at first, but then figured it out. It wasn’t a big deal, but we still had to pay $1.38 late fee. Not terrible, but I’m doing very poorly this month. Double check your addresses on auto bill pay!

I am really embarrassed to admit this, but I got an interest fee on a credit card this month. The bill came when we were visiting my parents in Kentucky. I looked at it online, but apparently got the total wrong. It was $440 and change, and I saw $400 and change, and that’s what I paid. This month’s bill had a $17.88 interest charge for not paying in full.

We use reward credit cards for every expense that allows them, but we pay them off every month. I swore that I am never paying interest again, but I goofed and have to eat my words. I should have taken more time to review it or set it up before we left. I could also set it up to pay in full automatically, but I usually like to review and check for errors before paying. This month I found lots of errors; my own errors!

This was going to be a short post, but I guess my stupidity is longer that I though. I am going to call the credit card to see if they might waive the interest payment. I am never late and always pay in full, so we’ll see. If I don’t get that waived and don’t get my $14 back from the phony DMV, I’ve wasted  $43.26 this month for stupid fees. We could have gone out to eat!  I take full responsibility. This reminds me that I need to pay careful attention to detail with bills so I don’t get hit with fees and late charges.

Have you ever gotten a fee because you didn’t pay attention? Do I get extra points for using the word thrice?