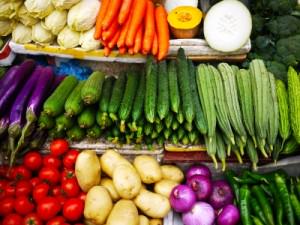 Laurie at The Frugal Farmer wrote a post a while back about how her mom worked really hard but just didn’t have enough money for groceries at one point. That post really stuck with me, and I vowed to find out more about the food banks in our community to see if there was something I could do to help. After I read an article in the local paper that asked for food donations,  I knew it was time for action. While I wasn’t really looking for a cheap route, I found out that giving food to the needy is actually one of the least expensive ways you can give back to the community.

Clean Out the Pantry

First I started with my own pantry. We’ve been doing really good about eating things we already have on hand, but sometimes you find food in your cabinet that you know you’ll never eat. I’m not sure why I had four jars of pickles. I also found a package of pre-made Spanish rice, a can of soup in a flavor we’d never eat,  and an unopened box of cereal that no one in my house likes. It makes me wonder if goblins stocked my pantry, but oh, well, I feel better knowing this stuff is going to get eaten by someone. We are truly not hungry enough to need it.

On my most recent grocery trip, cereal was on sale for about a dollar a box. I added three extra boxes of Cheerios for the food bank. Canned vegetables were also on sale for $.67, so I grabbed a few of those. For just over $5 and what was in my pantry, I had two bags of food to give away. My neighbor’s garden is going bananas, and he gave us way more zucchini than we’ll ever eat, so I threw one of those in there too. I wasn’t sure if they took produce, but thought I would ask.

In the past, I’ve put canned food in the donation box at the front of the grocery store at Christmas, or I’ve given to the Boy Scouts when they come around for their annual food drive, bit I’ve never visited a food bank. That changed last week when I dropped off the food.

You Feed the Community From There?

I’m not sure what I was expecting, and I’m sure food banks are larger in the city, but this one was a really small place with a really small stockpile of food for the amount of people that come through there. I asked what their biggest need was.

The volunteer who was working told me to first buy whatever was on sale. They could use it. They did take some produce, so my zucchini will hopefully find a good home. She also said there was a big need for things like peanut butter, cereal, pasta, tuna, and canned soups. It also broke my heart to hear that cans that don’t require an opener are requested because small children can get into those if they have to fend for themselves.

I admit that I’ve had pretty harsh thoughts in the past when I’ve seen people paying with food stamps buying a cart load of convenience foods. We all know it’s cheaper to make foods from scratch, but I guess many food bank clients live out of cars or cheap motel rooms without stoves or refrigerators. I know there are plenty of people who work the system, but I’m going to try not to be so judgmental going forward.

I am also going to admit how lucky and spoiled I am because I don’t ever remember having to wonder if I would have food at the next meal time. I believe anyone can change their situation in life, but maybe they need some help along the way.  I think from now on, I will make it a part of my grocery shopping trips to add a few items for the food bank. I can only hope someone would do the same for me if I was ever in that situation.

Have you ever been to the food bank? What do you have in your pantry that will never get eaten?