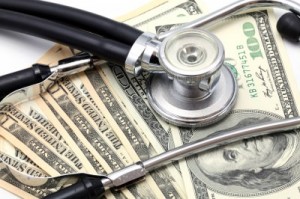 We’ve talked a few times about the pros and cons of Obamacare. This post isn’t to get people fired up or start political arguments, but I did run across a true life situation recently that certainly makes it look like Obamacare hurts self employment, at least on the small scale.

One of my closest friends is a high school math teacher.  We’ll call her A. She is really good at being a teacher. However, like so many of us after years at a job, she is burned out. With all the regulations and state standards, she feels most of her time is spent trying to prepare for state testing instead of teaching young people skills that might actually benefit them in the long run. It’s especially painful for me because when I look at her, I see myself about three years ago when I was a shell of a person going through the motions to keep all the plates spinning.

Now A and her husband, who is also a high school teacher,  are two of the most frugal people I know. They were probably the first landlords I met after we moved to Colorado. Back then all I could see was having bigger and better stuff, but she and her husband bought two small houses instead of a bigger one for themselves. They lived in one and rented the second place for extra money.

A few years later, they sold both houses to make one of their dreams come true. They used the profits of their home sales as a down payment and bought  several acres of land with a falling down old farm house. They lived in a camper with their toddler son while fixing up the place. They did almost all the work themselves, and now have a beautiful home that is run by solar energy. There are chickens and a greenhouse. My friends grow lots of their own food and even sell the excess as a side hustle. Her husband is a genius mechanic and can fix anything. They don’t ever buy new cars or appliances.

A’s ultimate dream is to build cabins on their property and run a farm to table bed and breakfast, but that is a huge endeavor, so they aren’t sure when or if it will ever happen. She doesn’t hate teaching per se, but has said more than once that she feels like anything creative or motivational has been squashed out. Her direct quote, “I feel like I’ve forgotten how to think outside the box. “

How many of us have felt that way?

A Chance At Self Employment

A few weeks ago, A found an opportunity that made her very excited. One of our local institutions had come up for sale. It’s a vintage Airstream trailer that the owner remodeled into a drive through coffee/morning breakfast shop.

The current owner built up the business and even purchased another more mobile trailer for off site events and special occasions. At its heyday, the business was doing really well. Then the owner had kids and Mommy guilt kicked in. She cut out working special events, reduced her schedule, and eventually moved to another town. She had a manager who ran the place for a while, but profits have gone downhill without the boss being onsite.

A and her husband got really excited about the business because it would be a bit like running the bed and breakfast but on a much smaller scale. There are other coffee shops in town, but no other drive ins and none with as much character and history. Being the smart money wise people that they are, they began to go over the books and make a list of pros and cons. We got busy and I didn’t talk to her for a couple of weeks, but when I touched base last weekend, it sounded like they had given up on the coffee shop.

It seems they were not put off by the work, spending savings, or by potentially not making much salary while rebuilding the business. The big red flag was health insurance.

As a teacher, A is used to having her health insurance fully covered by her employer. If she quits teaching, she has the option of joining her husband’s plan or going on the exchange for herself and her 8 year old son. Both of them are healthy and don’t have any chronic health conditions.

The cost to join her husband’s plan is $825 a month. She could also go on the Obamacare exchange, but the least expensive bronze plan costs $549/month and has a $12,600 deductible.

Ah, but what about a subsidy? Isn’t that supposed to be the thing that allows corporate employees to flee the ranks of tyranny forever and become entrepreneurs? Isn’t health care supposed to be more affordable for people who don’t make much money?

If you plug in the numbers from A’s expected salary from the new business with her husband’s teacher salary, they should qualify for a $655 a month subsidy to offset the cost of health insurance. With the subsidy, she could even bump up to a silver plan for about $30/month and lower her deductible to a reasonable $3,000!

Don’t get excited just yet. Because she is eligible to join her husband’s group plan, she is not eligible for the subsidy. No matter how much your spouse’s plan costs or how little you make, you can never get a subsidy if you have the possibility of joining a group plan.

To me, this is an incredibly unfair rule. Group plans are way more expensive than individual ones, and if you don’t have an employer to eat some of those costs, you are screwed.

Choosing From Bad or Worse

So basically, these are the options my friend has if she does not want to continue in education.

Yes, I realize if A really wants to do the coffee business, she could find a way to pay for health insurance. It’s the same argument that I could send my kid to Stanford if I made it enough of a priority. But is that fair? Should a budding entrepreneur have to pay ⅓ to ½ of her salary to afford health care just because her husband qualifies for a group plan?

My thought is that you should be able to get a subsidy  based on income, regardless of what you or your spouse’s job offers, but, I don’t get to make the rules. I’m afraid my friend is going to have to either deal with burn out or find something else, even if this could have been a perfect opportunity.

Do you see any other solutions for my friend’s situation?