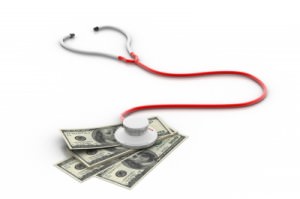 Saving Money By Not Buying Insurance

Let’s look at it from a purely financial standpoint. I will use a friend of mine as an example. We’ll call her Irene. Irene doesn’t have health insurance and has a decent job at a small business that doesn’t offer a group policy. Because her employer only has a few employees, they are not required to offer insurance under the Affordable Care Act. Her husband and step-daughter have coverage through his job.

Irene has no coverage for herself and her daughter, and they don’t qualify for state aid. For the two of them, it will be around $250 per month.She is a smoker and has a higher rate due to that status. The penalty for not getting insurance is $95 per adult or 1% of your income, whichever is greater. For uninsured children, the penalty is $47.50. In her case, the penalty would be around $300 per year. Financially, it would seem that $300 a year in penalties would be a much better plan than paying $3000 per year for insurance that still has deductibles and copays.

Because I like to play devil’s advocate, I asked Irene what would happen if she gets into a catastrophic accident on the way home. She says she has a savings account for medical expenses. “What if you have to be in the ICU or have surgery?” She said that she would qualify for CICP, which is the Colorado Indigent Care Program. It is a state program that covers emergency treatment and hospitalizations required to save your life if you are uninsured. I believe it covers more in some areas, but where we live, the hospital and sliding scale clinic are the only ones who accept it. It does not cover medicines, therapy, or surgeries that are non- emergent. I am also unsure what allows you to qualify, but she seemed pretty sure she would.  It sounds like she has it all planned out and is, in fact, saving money.

While that might seem well and good, let me also share a couple of stories from the last few months. Small towns are great for that!

Cost of a Brain Injury?

There was a lady we’ll call Marla who attended my morning exercise class for a while. I won’t say we were friends, but at 5:30 AM, you tend to bond a little bit. She was 51, in great shape, and looked years younger. Marla was several times divorced, had a new Harley Davidson, and liked to party. While I thought she maybe hung out at the bar a little much, who am I to judge? I’m a boring optometrist. Carpe Diem, right?

Well, Marla decided to let her new boyfriend, who didn’t have a motorcycle endorsement on his license, drive her around on the Harley. They hit a deer at 45 mph, without helmets. He walked away with scratches. Marla ended up with a severe head injury and a broken pelvis. She was flown out on a helicopter because our local hospital didn’t have the specialists she needed.

After surgeries to put her back together, she miraculously woke up, but obviously needs months of therapy for learning to walk and recover from her brain injury. Did I mention that Marla doesn’t have health insurance?

Guess what happens if you don’t have health insurance and need long term care? You get discharged and sent home. I have no idea if Marla will make a full recovery, but if she doesn’t, I will always wonder if it would have made a difference if she could have stayed in rehab.

Can You Afford Cancer Treatment?

My last story is one from a young patient we’ll call Hope. I have heard just about everything over the  years, so it is rare that I  get choked up during an exam, but I almost lost it on this one. Hope was 27 and came in for a regular eye exam, but I noticed she had marked cancer on her history form. Sometimes people get confused and mark family history as their own, so I asked about it.

Hope was first diagnosed with metastatic melanoma at age 15. It appeared as what she and her parents thought was a cyst on her shoulder. It was not a cyst. She beat it that time, but it came back at age 23 and spread to her brain and lungs. She tried all the traditional therapies and was losing. She got accepted into a hospital in Houston for a new program of therapy,which her insurance approved. Everyone else in the group died except Hope. She has been cancer free for four years. I wonder what would have happened to Hope if she hadn’t had insurance.

The Penalty Could Cost More Than You Think

No one thinks they are going to get cancer at age 15. No one believes they are going to get into an accident on a Sunday joy ride. Bad things happen to good people. When your time is up, it’s up, but what if by some miracle, you do survive something that should have killed you? Do you want the absolute best care, or do you want the minimally necessary standard treatment approved by a state indigent program?

Maybe you can save money by choosing not to get health insurance. It might seem like a good idea to take the penalty instead, but please remember Marla and Hope and the thousands of others like them who leave home happy and care free and come home fighting for their lives.

Health care in the US is a mess. We have some of the best and most advanced therapies and providers, but we don’t always have a way to access them. The system is broken, and it won’t be fixed tomorrow. I do think all people need at least major medical health insurance so that if the need arises, you can concentrate on getting well rather than how to pay the doctor bill. You really can’t afford not to be covered.

Obviously you get my take on the issue, but what about you? Will you purchase health insurance or take the penalty?