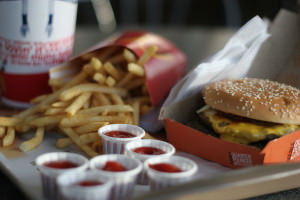 Two generations ago my grandparents woke up before dawn and had a breakfast that might have consisted of bacon, country ham, eggs, plus bisuits and gravy made with lard. Then they went out to raise livestock and grow crops, stopping only for an equally sizeable lunch and dinner consisting of whatever they had butchered and grown that week. They ate heavy and worked hard. Farming takes lots of calories. Fast forward 60 years to the office worker stocking up on donuts, king size candy bars, and energy drinks at the convenience store on his way to work. These have to hold him over until he can hit the dollar value menu for lunch. He’s so tired after work, he will just pick up a pizza. Wow, you can get an extra one for only $5 more, plus double meat, sign him up! He really wanted to stop at the gym, but American Idol is on tonight, and he has to answer comments on the new blog he just started. Is it surprising that his pants were a bit too tight this morning?

Obesity in America is a huge problem, and it’s getting worse. Some recent statistics from the Center for Disease Control:

Working in health care, I get to see the snapshot of a person’s overall health during the course of their eye examination. It is getting to the point where being obese with at least one complication like high blood pressure, diabetes, or high cholesterol is the norm rather than the exception.

In the past few weeks, I’ve seen a 15 year old type 2 diabetic (type 2 is usually because of being overweight) with high blood pressure. He weighed just under 300 pounds. I also had an emergency visit with an over 350 pound gentleman. He said his eye “felt like this when I had my first stroke.” He was in his mid 40’s.  I also saw an 85 pound five year old, and I live in Colorado, the least obese state in the U.S.

What did all these people have in common besides morbid obesity? They were all on Medicaid, meaning the government is paying for their chronic health care.  Arguably, they probably won’t live to a ripe old age, but until then, thousands of dollars will be spent annually to care for them.

Obesity is not only a problem of health care dollars. It affects a person’s self esteem. Obese people are often seen as lazy and become the butt of jokes. First impressions are very important whether they are fair or not. Most employers wouldn’t admit it, but I bet many obese people have been passed over for jobs because of their appearance or fear that they might not be healthy enough for the job.

What is the solution? You would think the threat of death might scare people into being more healthy, but apparently that isn’t working. I don’t know the answer. It does get harder to stay at a healthy weight as you get older. I think my metabolism stopped at age 35, so I have to work that much harder just to maintain. I can’t think of a valid excuse for having an obese child. Children can’t hop in the car and head over to the drive-in. They eat what adults feed them and join in with activities we provide for them. Since few seem to be stepping up to the plate, I’ll throw my two cents in.

I think we all need to look at the problem and stop being so sensitive. I’ve never met anyone who set out to become obese. Just like with personal finance, we sometimes make bad decisions and don’t see a way out.  When was the last time you gave a word of encouragement to an obese person trying to work out? If we start a dialogue about how to help rather than making snide comments or putting people down, maybe we can encourage more healthy lifestyles. Otherwise, I guess we all need to buy more stock in health care products and fast food.

Do you think obesity is a problem? Are obese people treated fairly?