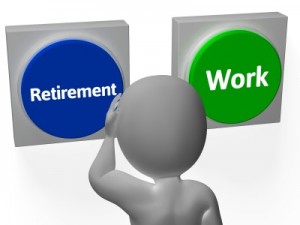 Back in the day, workers could count on putting in 20-30 years on the job and scoring the coveted gold watch AND a lifetime pension. Sure you might be too old and broken down to enjoy it, but by golly, there was a check every month. With that sort of guarantee, there was really no need to save for retirement. Nowadays, pension eligible jobs are few and far between, but if you can score a position with the federal, state or some municipal governments, pensions do still exist. Does that mean people with government jobs don’t have to worry about their golden years? Maybe, but I believe even employees with pension jobs still need to invest for retirement.

How Do I Get A Pension Job?

Well, it’s fairly simple. You’ll need to become a teacher, police officer, sanitation worker, or one of the roughly 21 million government employees in the United States. You could also join the military and put in the the years to get a pension if you don’t get blown up or become discharged due to PTSD.

I think lots of people assume pension eligible jobs are low paying, but that’s not the case. I know doctors, judges, pharmacists, even surgeons who work for the government and make high salaries plus great benefits. If you’re willing to live in the Washington DC area, the doors are open wide for all types of government employment.

Pensions Mean I Won’t Have To Save For Retirement

Because Jim works in education, we know tons of teachers. Some of them are great with money and invest in stocks, small businesses, or real estate. Most of them don’t invest and are limited to putting in the time required to get a fully vested pension. I guess it works, but it’s also a bit risky.

One huge problem with pension jobs is that they generally require 20+ years before workers are eligible for retirement benefits. I’m sure there are people who claim to love their job for that many years, but I’ve never met one. I have met lots of burnouts. You know the type. They show up for work, do the minimum required to get through the day, all the while bemoaning and complaining about how much they hate their jobs.

The problem is that once you have a certain number of years, you feel the need to finish out your sentence. I’ve talked to tons of people who were “just holding out for a few more years.”  You don’t see many who walk away, even though they are miserable every day.

When starting out, people feel they are ready to work forever, but from experience, 10 years is about all most of us can handle before we need a change. If you’ve put all your eggs in the pension basket, it’s hard to do anything different.

People Get Sick, Disabled, and Die

The unknown is a huge reason everyone should invest outside of a pension plan. According to the US Social Security Administation, twenty year olds have a one in four chance of becoming disabled before they retire. You can’t count on it not happening to you. Even with federal disability benefits, the future does not look bright if there are no outside investments.

Also, if you are the sole income for your family and you die, what happens to your pension? If you aren’t sure, it’s time to find out and make back up plans.

Hopefully no one gets married thinking they will end up divorced, but 50% of marriages end that way. I have a cousin who was married to a government employee. She did not save anything for her own retirement because he was eligible for a pension. You can probably see where this is heading, but they went through a nasty divorce where the judge granted my cousin half of her ex’s pension. Now they both have to keep working or try to support two households on a pension that would have been tight for just one.

The Government Could Go Broke

We’ve already seen this in places like Stockton, CA. While it’s doubtful that the federal or state government would abandon all pension plans, they certainly could change the rules or apply more taxes to pensions. I would hate to put my retirement hopes in the hands of any type of government.

What Can I Do To Make Sure I Retire With Enough Money?

I think the key to having the retirement you want is being diversified. We are planning on Jim’s pension as a part of our retirement income, but it’s not the only ship we’re sailing. It’s not even the main part of our planned income. We sort of view it like social security. Whatever we get will be icing on the cake to top off our own investments.

Even if you don’t make much money, it’s important to try and invest a percentage of your income toward retirement. The key is to do it from the beginning so you don’t miss it, but it’s never too late. If you can manage to cut expenses or make some extra money, every dollar invested today will compound for tomorrow.

Also, whether you have a pension job or not, everyone needs disability insurance and anyone with dependents needs life insurance. It’s cheap if you’re fairly young and healthy.

I guess you might call me a glass half empty person because I will never assume that one vehicle will support retirement. I believe I’m a glass half full because I want to have all the bases covered in case of the unknown. That’s why we’re working so hard to invest, even with the potential of a pension.

Would you take a job for the pension? Do you think the government would ever stop paying pension benefits?

Table of Contents
How Do I Get A Pension Job?
Pensions Mean I Won’t Have To Save For Retirement
Golden Handcuffs Anyone?
People Get Sick, Disabled, and Die
Couples Split Up
The Government Could Go Broke
What Can I Do To Make Sure I Retire With Enough Money?