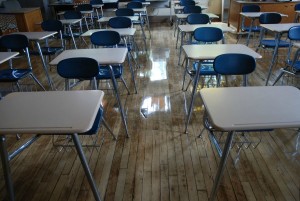 For the most part I love the rural area of the country where we’ve chosen to live. It fits our needs and desires, and we’ve been able to make a good living here.  However, there is a large percentage of the population that lives below the poverty line. My husband will be completing a master’s degree in education administration this summer. Recently, as a practicum requirement, he has been observing parent conference at the middle school. Instead of accepting responsibility and working toward a better the situation, all of the parents blamed being poor in some way for why their child was having difficulty in schools. It leads to the question, is poverty in the United States an excuse to do poorly in school?

The district in which my husband works is not a good school district. That’s one of the reasons we decided to send our daughter out of district for kindergarten. It has one high school, which graduates around 60% of the kids who start as freshmen. Recently, a new superintendent is working very hard to change that percentage, and the middle and high schools are trying to increase parent involvement. If a child is not doing well, a mandatory parent conference is required. Basically, you are called for a conference if your child is failing, isn’t showing up for school, or is involved in repeated behavioral violations. My husband sat in on several conferences last week, and all of the students having problems lived well below the federal poverty line. I’ll highlight the general theme with this example.

This parent blamed everything on society. She was a single mother of 7 children and a former drug user. Her first words were,

Her children had poor attendance, and her blame was on the fact that she was poor, had too many of them, and she had been homeless.She blamed the school and teachers. I suppose if she had more money and the teachers were better, her kids would be doing fine in school.

Who is to Blame?

It might be easy to blame bad behavior on teachers or schools, but how on earth are you ever going to get anywhere in life if you can’t get along with people you don’t necessarily agree with? Unless you are independently wealthy and never have to work for anyone, you will run across a teacher, boss, or upper level employee that you have to answer to. Not showing up because you don’t like them or can’t get along doesn’t move you very far in life.

I’m sure it’s hard to worry about getting your kids to school if you have no food or shelter, but that’s a great place for them to be. At least you know they will be safe and have two meals a day.

I don’t know that there is an easy solution, but I do know that without a high school diploma or any sort of marketable skills,  short of winning American Idol, the best you can hope for is working minimum wage and living paycheck to paycheck. I suppose you could qualify for some sort of aid. It seems that being low income is generally all that is required.

My personal belief is that anyone receiving government aid has to make sure their children attend school. Not that attending guarantees a better life, but not attending pretty much assures more of the same.

At least this lady is trying. She has job at Sonic, which at minimum wage and 40 hours per week, should net her about $1282 per month. She would be eligible for many services.

She could get by. She has to stay off drugs or she will lose her apartment, and if she smokes or has cable, or spends money on any sort of non-necessity, this takes a huge chunk of her take home pay.

For this example, taxpayers are covering most of this family’s basic necessities. This is not a political argument for or against taxes. As long as Mom is working and trying, I don’t mind helping her out. I think all kids deserve food, shelter, and adequate medical care. It does bother me when those who choose not to work are able to contribute little to society, but take lots.

This lady does need to accept responsibility. I have no idea, but I bet she grew up in poverty herself. She may not have had good role models, but It was her choice to have children she knew she couldn’t support. It was her choice to use drugs. Her lack of funding does not give her an excuse not to be a better person for her children. She can’t control every circumstance, but she has to stop blaming everything else. The least she can do is get those kids on the school bus and participate in their lives.

I guess this is easy for me to say.  I’ve never had to worry about if I was going to eat or if I had a warm place to sleep.  I could argue that her monthly per person food budget is more than mine, but that’s by my choice. I could spend more on food, but I choose to do other things with my money. Does having choices about what to do with your money make you a better parent? Do you feel less empowered if most of your money comes in the form of assistance, or do you love the fact that you didn’t have to do much other than fill out forms and meet with a case worker?

Please share your opinions, especially if you have broken the cycle of poverty or have received public assistance in any way.