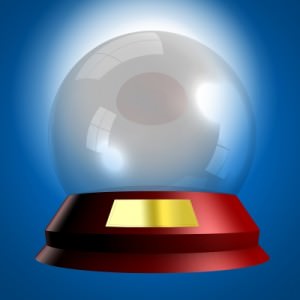 Yes, you did read the title correctly. In order to make profitable investments, you do not need to predict the future. I understand that at this point, what I’m saying doesn’t make much sense. Let me elaborate.

Most investors are accustomed to predicting the future of the stock market – where will it be in the next 3 months, 6 months, 1 year, etc. They do “research” online, and come up with all these predictions backed up with fancy data. However, I prefer to invest differently.

I’m not a very smart guy – I literally spent a year preparing for my SAT’s, just to get a meager 1490 (considering the effort v. reward ratio, my score was disappointing). Hence, my brainpower (or lack of) doesn’t let me predict the future like all those Harvard MBA analysts on Wall Street can. My investment style is simple and straightforward: instead of predicting what the economy will be like in the next 3 months or 6 months, I just recognize the fundamentals when they appear. Now you’re probably asking “How does simply recognizing reality give you an edge? You’re not ahead of the curve at all!”

Truth is, you don’t have to be ahead of the curve to make money, because often times the market is behind the curve. Often times, the market will ignore reality and continue on its disillusionment, as in the case with bubbles and market panics. Here’s how to make profitable investments without predicting the future.

As a corollary, I’d like to add two side notes:

Here’s an example. From 2010 – 2013, the Euro problem has never been solved. At random times, the Euro will tank and European interest rates will skyrocket because people are FORCED to care when reality has strayed too far from belief.

Welcome to the Future..

We’ve already established that you only need to recognize the future – you don’t need to predict it. The important question is, how does one recognize the current fundamentals as soon as possible?

Most economic indicators tend to be useless – I’m not questioning the accuracy of their measurements, although sometimes the numbers do seem to be oddly skewed (hey, at least our data is better than Chinese economic “data”!). The problem with most economic indicators is that they come out a month or two after the events have already happened! February’s economic data might be released in April, a whole 2 months after February’s over. What good is data that’s 2 months old? It’s almost useless for investment purposes. There is a solution to this problem though – gauge the economy via real time sources: