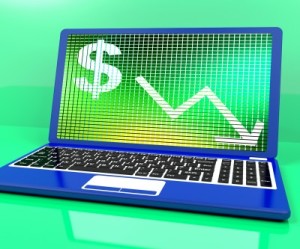 The Internet is full of great stuff for finance enthusiasts and people who generally want to make money. However thee are also a lot of stuff that will fool you into believing that you can either get a great bargain or get rich quick if you participate in certain schemes.

This article will show you some of the most frequent methods people lose money online these days while at the same time they believe they are actually participating in a great money making scheme.

Penny action sites were very popular some years ago. Even though their popularity faded over time they are still present on the web in 2014. Essentially, these sites will auction various products such as iPhones, tablets and other cool stuff for seemingly extremely small prices, such as $10, $20 and similar.

The concept these sites use is in itself not a scam and there is nothing illegal about such sites. It’s just that due to the nature of how these sites work people will end up spending much more money than the $10 price they pay for an iPhone.

These sites work the following way:

You as a customer are required to purchase so-called bidding credits. Lets say a credit costs $1. Each time you bid in an auction 1 credit will be removed from your account. If someone overbids you, you will not get your credit back and will have to bid again in order to have a new chance at winning.

The trick is that each time someone bids the price of the auctioned item will go up with something like $0.05 while in reality people were bidding $1 (technically 1 credit) per every single bid.

So, in the end, once a bid is finished, the auctioned price of a product might end up something like $10. The $10 amount was reached by the cumulative increase of $0.05 per bid, meaning a total of 200 bids. 200 bids means that there were $200 spent during the whole auction and not just $10.

So, while the end product may indeed only cost $10, the total amount of money spent by all the bidders spent during the auction was $200.

The above is in no way illegal, as pretty much all the sites that do this are completely open about it. The problem is that participating in a scheme such as this leads to people running after their money and spending massive sums hoping to recover their past loses.

Imagine two people participating in a bid war with both of them pacing more than 50 bids individually. At this point no one will want to give up, as that would lead to the loss of the 50 credits and the $50. Both people will continue to bid as much as their wallet allows hoping that the other will give up and they can walk home with at least winning the auctioned item and not finishing empty handed.

So, like said, there’s nothing shady about these sites, except that the concept their function on is very similar to gambling which often can lead to addiction and to people chasing their money, ending up losing more than what the auctioned product is actually worth.

Binary options websites promise people extremely large winnings without much effort. For most people a claim like this is already enough to understand that companies and websites that promise things like this are bs.

Binary options websites allow people to bet on the future movement of various financial assets. For example, if you believe that the value of gold will go up in the near future, then you can bet a certain amount of money on this outcome, the same way you would on a sports event, for example.

Nothing wrong with this as well, however most sites that offer these services promote binary options as a legit form of trading. In reality, it’s not real trading but gambling and betting much like betting on football games.

Also, in most cases binary options brokers make money when traders lose, as explained on the linked website. So these websites will have a direct interest in people losing money, as that’s the way they make profits. Pretty much the same as a casino.

The Internet is also full with various make money online websites that promise if you do certain things you will be making a lot of money. In every single case like this, these websites will require you to purchase something, a seminar, video course or a book.

These books or videos will then supposedly teach you how to make money online. They often claim that the things thought in them are the methods their creators use to make money. The creators of such courses and books are indeed very wealthy but not because they use some hidden tricks or secrets but because of people who purchase their courses.

There’s no secret strategy they will teach you, as all the money (and lot of it) they make is from people who buy their books and courses. In short, the whole thing is a scam and you’ll be just wasting money if you buy into these things.

Why would any person who makes massive amount of money reveal their secret to others for just $39.99? If they would actually do that it would create massive competition resulting in them making less money in the future.

So, instead of wasting money online you should actually be learning how to properly save. This is the safest way to avoid getting scammed.