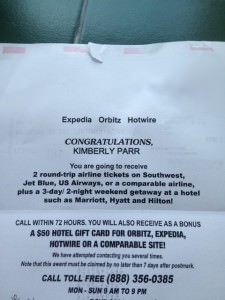 Back before the recession hit, we used to get offers for time share presentations pretty regularly. I personally think buying a timeshare is right up there with purchasing ocean front property in Kentucky, but to each his own. After the economy went south, I assumed those went the way of the dinosaur, but low and behold, look what we got in the mail a couple of weeks ago!

I guess it’s a good sign of economic recovery that there is a market for such things again. I don’t know that these offers could be considered a scam because you generally get the prize they are offering if you do your part. However, the things they are usually selling are not generally a good use of money. Do you know how to spot a scam?

Being the curious person that I am, I called to see what this offer was about, assuming it was a timeshare presentation. The very perky operator told me that to claim my prize of two airline tickets for anywhere in the continental US,plus a two night hotel stay and a $50 Expedia gift card, all we had to do was attend a 90 minute presentation about joining a vacation club.

What Would You Do For a Prize?

Honestly, if they told me I had to sit in a porta-potty and listen to Roseanne Barr sing the national anthem for 90 minutes, I would do it if the prize was good enough. This one is actually something we will use and is probably worth $1000 or more, so I agreed to attend the show. We set out wearing our best neutral faces and were determined not to buy a bucket of water if they set us on fire.

Scam of the Day

When we arrived, we found out it wasn’t for a time share at all, but for a vacation service called My Getaways, which is a part of a club called Saver Express.  A quick search on the smartphone didn’t turn up much, which was red flag #1.

What Happens During the Presentation?

There were five other couples there, and one by one, a salesman came to escort us into a conference room. After a few minutes of mindless banter, another gentleman got up and began a 60 minute presentation  and slide show about Saver Express.

I’d never heard of Saver Express, but it sounds like a glorified travel agency. If you join, you get to call one number to book any sort of travel you can imagine, supposedly for highly discounted rates. You also got a rebate at the end of  the trip because they essentially gave their commission to the members, but there was no concrete number given for the amount of the rebate. They did show some sample itineraries that seemed like pretty decent deals, but you can’t have access to the deals unless you join, so there was no way to compare to the prices I can score on my own.

Well, you get all this service for the low, low price of $8598 to join and then $199 a year. The membership lasted for 50 years and was guaranteed to never go up in price. An added bonus was the first two couples to join, got a $1000 travel credit added to their account! Are you salivating yet?

After the presentation, which was fairly entertaining, we got some one on one time with our salesman, Rex. I’ll admit, Rex was good. He began by telling us that he would buy back the free travel voucher we were getting that day for attending. It was valued at $1700, but he was going to give us $2000 for it. With extra $1000 for being one of the first two couples to join, we’re down to $5598 already.

Rex then said that we really didn’t need the 50 year membership. He’s probably right. In 50 years we’ll be 93 and 89, so our big trips will be going to the nursing home cafeteria. Good point, Rex. If we bought a 25 year membership instead, we could get the deal for $3598!

It didn’t take us very long to tell Rex we were going to pass on the deal. Just when I was wondering who on earth would shell out this much money to have someone book their travel for them, the salesman at the table in front of us stood up and congratulated Marcy and Stan on buying their membership. Oh Stan and Marcy, you should have talked with us first. I can’t help but feel like this couple was scammed.

This was a great experience in psychology.  Like the power of a Jedi mind trick, they used all the popular sales pitches including starting with a higher price to make you think you were getting a deal when it was lowered, having lots of pictures of families making memories during the slideshow, giving us a “discount” for being one of the first takers, having a limited time opportunity, and on and on.

We did get our travel voucher for attending. It seems kind of convoluted to redeem, but I am someone who can stand in line for 30 minutes to buy gift cards to get extra reward points, so I think I can handle it. If it does pan out, this was pretty easy money.

In conclusion, there was pretty much a zero chance of our buying anything, but it wasn’t the worst 90 minutes I’ve ever spent. I got a morning alone with my husband, and we went out to lunch, which we normally don’t do without the kiddo. Hopefully, the travel voucher will allow us to take a pretty cheap trip for spring break, and it will let us save our reward points for another trip at a later date. If I got another offer tomorrow, you can bet I’d be one of the first ones to sign up for the presentation, but I’ll always say no to the scam.

Have you ever know anyone who fell for a high pressure sales pitch? Have you gotten any good bonuses for attending one of these scam deals?

You won’t need to fall for scams if you win some free cash. There are only a few days left to enter my one year blogiversary contest!