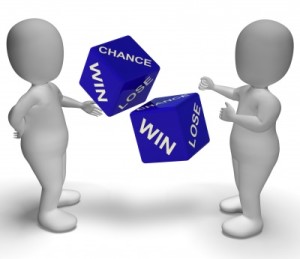 In April 2004, a man from Kent in the United Kingdom made what would be for most of us, the ultimate bet. He put everything he had on one spin of a roulette wheel.

The man in question was called Ashley Revell. As part of a television mini-series entitled ‘Double or Nothing’ Revell had sold everything he owned to raise £76,840 ($135,300). He then journeyed to the Plaza Hotel & Casino in Las Vegas, and dumped the whole lot on red.

If you’re not sure how roulette, a game which can be played online at Full Tilt, works, then here is a quick explanation: Within a large bowl there’s a spinning disk divided into 37 (or 38 in the American version) segments. One (or two in the American version) of these segments is colored green, 18 are colored red and 18 black. There are different bets you can place, but one is ‘Red or Black’. The casino dealer spins the disk, then spins a small ball around the wheel in the opposite direction. The ball will eventually settle in one of the segments. If you bet on red and it comes up red – then you receive back double your initial stake. If you bet on red and it comes up black, you lose everything.

You can view Ashley’s gamble here.

Amazingly, Revell admitted afterwards that he had always intended to gamble on black, but changed his mind to red at the last moment. The ball came up ‘Red 7’ and the ultimate all-or-nothing gambler now had £153,680 ($272,000). Instead of going for “double-or-nothing” Revell calmly handed the casino dealer a $600 tip and returned home.

Eight years on from his bet-of-a-lifetime, Ashley is a very different man. He spent some of his cash setting up an online poker site, then went on a round Europe trip on a motorbike. Whilst in Holland he met a girl whom he brought back to England, where they married. They are both the proud parents of two children. Ashley’s poker venture never really took off, but he now runs iGaming Recruitment, a website that matches job applicants with online gambling companies who are seeking to recruit. The only real downside to Ashley’s amazing bet is that it inspired media lord Simon Cowell to create a poorly-received game-show based upon the same principal. Happily, the series was canceled after two series.

Looking back, Ashley admits that he now recognizes why everyone around him told him his ultimate gamble was ‘a stupid thing to do’. It can only be surmised what would have happened to him if that ball had landed in one of the roulette wheel’s 18 black segments.

While Ashley did get lucky, he could have also been wiped out with the spin of a wheel. There is no true get rich scheme in life. The only way to guarantee financial success is to always spend less than you earn, invest a high percentage of your income in sound ventures and avoid consumer debt.