As a renter, you’re probably aware that credit score plays a major part in the renting game and your main concern should be to keep it in top-notch shape. If you’re planning to move to another city, the recent study published by apartment search website RENTCafé shows the average credit scores of renters in different U.S. cities, as well as the average rent that you would be paying. 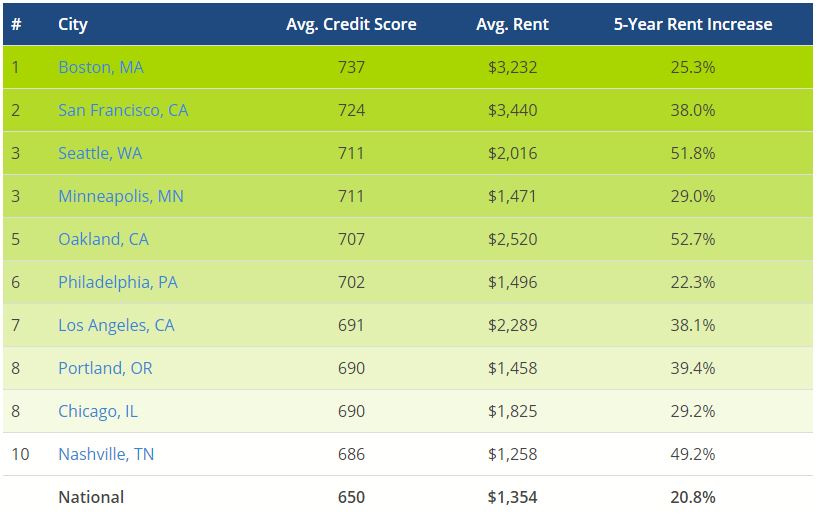 Boston renters approved for an apartment had an average credit score of 737, the highest among the 50 largest U.S. cities. As for the average rent, Bostonians pay about $3,232/month.

If you live in San Francisco, CA or plan to move there, you’ll need a very high credit score. San Fran applicants approved for an apartment had an average score of 724. Renting in the Golden Gate City comes with a monthly price of $3,400, which is 38% more than it was 5 year prior.

Those approved for an apartment in Seattle, WA and Minneapolis, MN had the third highest credit score average of 711. It’s worth pointing out that in terms of rent, renters living in Seattle pay an average rent of $2,016 while those in Minneapolis pay about $1,471/month.

One of the most competitive markets in the country, Oakland, CA witnessed an increase of 53% in the monthly rent with renters paying a monthly price of $2,520. With these high numbers, it’s no wonder that Oakland applicants approved for an apartment had an average credit score of 707, higher than those in Philladelphia, PA (702), Los Angeles, CA (691), Portland, OR (690), Chicago, IL (690) or Nashville, TN (686).

Although some would have expected to see New York in the top 10 highest credit scores, it seems that the market is not as competitive as we would have thought. The average credit score of approved applicants in New York was 654.

As for the cities with the lowest credit score needed to rent an apartment, approved applicants in Las Vegas only needed a credit score of 590 to live in one of Las Vegas’ cozy apartments.

Since credit score is strongly connected to your chances of getting approved for an apartment, take a look at the graph below to see how likely you are to get your name on a lease. 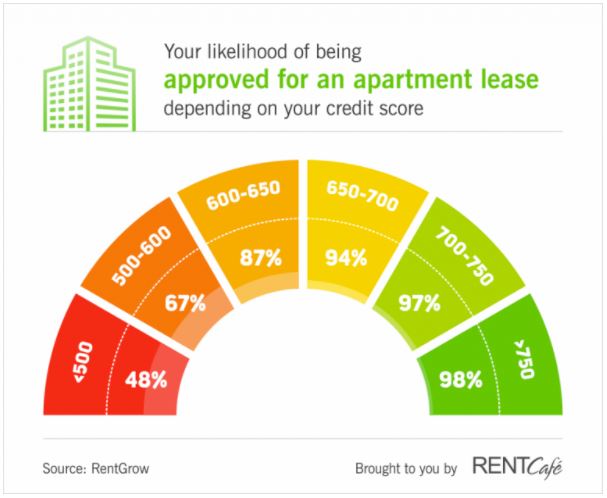