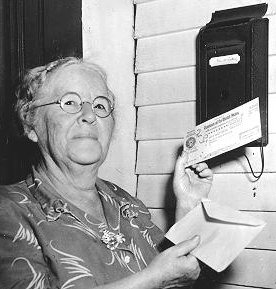 I was reading this article over the weekend about how folks who depend on social security aren’t getting much of a cost of living increase this year and haven’t for several years. Of course, there was the requisite moaning and groaning from seniors and from advocates who always seem to be talking about how hard seniors have it and how meager one’s existence is if social security is your only income. For those people who have retired with no income other than social security, I have one word: Lucky!

Yes, you read that right. I think people who are receiving social security are lucky. In 2014, the average social security payment per month was $1294. I realize that’s not a ton of money. Hopefully you have other assets and/or income streams, but even without those, you’re still lucky.

You might not be able to live in that gated golf community or travel around the world. You probably can’t pay for your grandchildren’s college education. You might not even be able to live in many expensive areas of the country. However, there are plenty of areas in the US where you can rent a modest place, cover utilities, pay for groceries, and have a little bit left for incidentals. You won’t starve or have to live in a cardboard box. You know you will, barring some sort of Armageddon, get your social security check every month.

Who Won’t Be So Lucky

You all know I’m a bit older than the average blogger, so I might get some social security. At SSA.gov, it says that I will receive $1935 per month if I continue to make the same salary until my full benefit age of 67. Then, if you look at the fine print, it says something to the effect that social security is in a bad way and if changes don’t happen, payments will be reduced beginning in 2033. That’s only 19 years. What if I was 20 right now?

That’s right, for you kids, there probably won’t be a nice solid check every month from age 67 on. Either they will keep raising the retirement age or the percentage of benefits will be reduced. If you retire in 2053 with nothing other than social security, you might be living in that cardboard box.

Don’t Depend on the Government

The solution is so simple, yet difficult for so many. Don’t depend on the government. The government doesn’t owe you anything. Regardless of what so many people believe or feel entitled to, we’re responsible for our own selves. You can spend all the money you want on whatever you want, just don’t expect Uncle Sam to bail you out down the road if you choose not to save for retirement.

If you want to retire with assets instead of nothing, you have to be proactive now. If you stick to your plan, it doesn’t matter who the President is or whether or not Washington makes decisions.

1)Live Below Your Means

If you spend every dime you make and them some, debt will be your undoing. I don’t know how anyone who remembers the fairly recent recession can continue living paycheck to paycheck. Luckily, we didn’t have any major financial setbacks during that time, but we did see some close family members lose everything. It profoundly affected our thinking about money. I don’t know what more it takes to wake people up.

I think the majority of people have one main income source, and that’s great, but you always need to be thinking. If your job ended tomorrow, what would you do? If you have no idea, start planning. Find a side hustle. Invest in real estate. Make connections. Learn new skills. Putting all the eggs in one basket might be easier, but I don’t ever want to get too secure and take my income for granted. I wouldn’t lose sleep over this, but when times are good, that’s when the wheels need to be turning. You can make your own luck if you have enough options when things go wrong.

3)Save Some of That Income

How many people were forced into an earlier than planned retirement because they lost a job during the recession and didn’t have enough savings to wait out the worst of the economy? I know lots of people who were 62 and went ahead and started social security benefits. I also know people who lost a house or cashed in their 401k plans. How would life be different today if they’d had a 6 month emergency fund?

It might seem silly to keep a chunk of money in a savings account with today’s interest rates, but if your job disappeared tomorrow,  you’d be so glad to have that cushion. It would, if nothing else, buy some time before having to go into panic mode. Most people don’t think clearly in a panic.

After paying off credit card debt, we have relaxed our spending a little. I think life is too short to deprive yourself of everything all the time, but always think about tomorrow. If I buy a new car every four years or spend $500 a month on clothes, how many years does that set back my retirement?

Right now, I really, really want a cleaning person. If I do that, that’s probably $200 a month that isn’t getting put into retirement or paying off our mortgage. I know that when our house is paid off, we’ll probably be financially independent. That’s way more important to me than hiring a housekeeper. In the moment, when I’m up to my elbows in the mop bucket, I sometimes forget that, but ultimately, long term goals are more important. I’ll do a few things I don’t like today, so I can do whatever I want tomorrow.

I do feel empathy for people who have worked 40 or 50 years and have nothing to show for it other than a monthly social security check. I think some people do get an unfair shake, but I would argue that the majority of people in this position went their whole lives without considering the four steps mentioned above. No matter how much complaining I hear about fixed incomes, at least there is a fixed income to complain about.