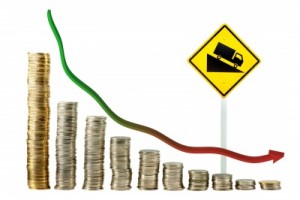 A huge topic in the online finance community is making more money. I read articles about how to make more money through side income or ways to increase your salary. For the last few years, I’ve been slurping those up like cold drinks on a hot day. When trying to get out of debt, you really can’t make enough money or make it fast enough. What about once those goals are met? Are there any negatives to earning more income? Is there ever a situation where I should try to make less money?

My family would never qualify for Obamacare subsidies because Jim’s work has a group plan that we could join for $800 a month, but let’s assume he did not. For our family of three, if we made under $79,000, we could qualify for a subsidy. Our insurance policy might actually cover something, unlike our current $10,000 deductible plan.

Luckily, we don’t have many health care expenses, as we’ve been pretty healthy up to this point. This isn’t really a huge issue at the moment. My daughter and I are still on a grandfathered Blue Cross plan that costs only $265 per month, so even with the huge deductible, we are still coming out ahead. If they ever cancel our policy, we’d be looking at double that cost or more. That would make a subsidy much more appealing.

The past two years have been our highest earning ones ever because I sold both my practices over the course of 2013 and 2014. We had to pay more income taxes, plus 2013 triggered an increased Medicare tax. Don’t misunderstand. I am not complaining about the money I received from the sale of my practice, but it is sad when the first thing that pops into your head is how much tax this is going to cost.

Also, being self employed means paying more in FICA. With my profession, it also costs roughly $2000 a year to maintain my ability to practice due to insurance, things like state and DEA license fees, and continuing education. If I were to work less, I could apply for part time licensure, which would cut some of those expenses.

I would be lying if I said I don’t worry about how much it might cost to send our daughter to college. I have no idea at this point if she will even want to go, but I’m assuming she will because both her parents did, and we place a high value on education. We do save every month for college expenses, and I don’t believe student loans are the end of the world, but it’s disheartening to think about our kiddo coming out of school tens of thousands of dollars in student loan debt.

I read an article last week that Stanford raised it’s free tuition program to families whose incomes are $125,000 per year or less. There are several other ivy league schools who offer free tuition to students who fall under certain income levels that most would consider solidly middle class. Even if you look at state schools, students from lower income families receive tons more grants than those with family incomes like ours. I don’t want to be poor, but if making less money means upwards of $100,000 in education costs for our child, it’s tempting to make less money.

What is the Best Income Level?

It obviously depends on where you live. In cities on both coasts, our current income would make us poor. In Southwest Colorado, we are high earners. In reality, we could comfortably live on $3000 a month if we didn’t have emergencies or rental vacancies. In reality, we will have both, so it’s important at this stage to continue making enough income that we could pay the mortgages on all our rental properties, without tenants, and still pay our normal monthly expenses. We also like to save for retirement, so I’d hate to give that up as well.

We are high enough earners that the government considers us wealthy, but we would still have a hard time with a huge medical expense or paying for college in full. I think lots of people are in the same boat.

How Would a Lower Income Impact Us?

I have considered quitting optometry altogether. I’m not thrilled with all the new health care requirements for providers, and I think patient care has suffered, not improved, with all the new regulations. It’s not the career it was a decade ago, but we probably would have a tough time with only Jim’s salary unless we sold our house, which could be good or bad depending on a number of things. I doubt I could quit altogether, but……

What if we lowered our income to the Obamacare subsidy limit?

Do We Need To Save So Much Money?

Right now we do. As I said, for me to sleep well at night, we have to have enough income to cover all the expenses on our rental properties. However, those will be paid off in about eight years, along with our home. At that point, our expenses are minimal and I think it will be time to toss in the towel and live off the fruits or our efforts with potential help from Uncle Sam. I am not a big fan of government assistance in any way, but it might be better than continually subsidizing everyone else.

I don’t write this post to taunt anyone who is stuggling to get by or fighting to pay off debt. I’ve been there and I want all those people to make as much money as they can. I do write for those of us with good incomes, little debt, and the desire to slow down. Maybe making less money is the key.

What do you think about lowering income to take advantage of tax incentives and subsidy programs?

Table of Contents
Health Insurance
Taxes And Fees
College Education
What is the Best Income Level?
How Would a Lower Income Impact Us?
Do We Need To Save So Much Money?