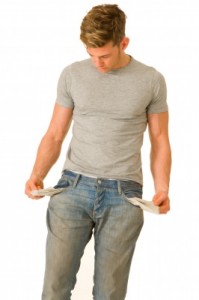 We all know that millions of Americans live paycheck to paycheck and often turn to credit cards to get by until the end of the month. I don’t believe anyone sets out to bury themselves in debt, but there certainly isn’t a stigma attached like back in the old days when you didn’t buy it if you didn’t have the cash. I think our society makes it OK, even revered, to be broke.

I had a patient recently who could be the poster child for paycheck to paycheck. He had no idea what his insurance coverage was other than “it was through his wife.” His wife had never been to our office. He was told he’d need to go ahead and pay for the exam and we could reimburse him after we had the correct insurance information.

Him:“But I don’t have any money and I don’t get paid until Friday.”

Office: “We can reschedule your appointment.”

Him: “But I’m playing softball tonight and need a pair of contacts. My last one tore yesterday.”

Office: “Do you know what your wife’s insurance plan is?”

Office: “Well, we can check some of the more common plans to see if she’s a member. Do you know the last four digits of her social security number?”

I Don’t Have Any Money.. Except For Cigarettes

At that point, he left the office to go to the post office to ask his wife what her social security number was. Thank goodness for small towns!  When he came back with the number, our office did a search and found his wife’s insurance and got him authorized for his exam. This took about 20 minutes.

During the exam, he admitted that he’d been wearing old contacts for the past two years, (which is as bad as Brent!). When I asked why, he said that he wasn’t able to buy new lenses because of financial reasons.

I also have to mention that  he smelled so strongly of cigarette smoke that it made my eyes water to be in the same room with him. He had the obligatory pack of Marlboro reds in his shirt pocket. I’ve never smoked but I’d say he is at least is a pack a day guy, probably more.

So, as you probably can already guess, I did not do what I should have done, which was tell him he would have to reschedule his appointment because he came unprepared, and finding his insurance information took his exam time up for the day.

I did not tell him that because of this, that’s 20 minutes I won’t get to see my family today.

I also did not tell him that I would not give him lenses, even though he probably will continue to abuse them. If he gets an ulcer or infection from dirty contacts, I’ll see him and do whatever it takes to make him feel better.

Because we aim to please, I was super nice, stayed late to finish his exam. I even gave him a brand new pair of contacts to play softball. He was very happy and thankful that we were able to help. Another satisfied customer.

Was this the right thing or did I continue to enable him in living paycheck to paycheck? I’m not picking on this patient or even on smokers. This could be a million different people who are broke for a million reasons but still smoke, drink, get tatoos, have personalized ring tones, drive a car with a payment that takes a quarter of their income and just got the new iPhone 6,even though their old one worked just fine. Being broke gives you something to talk about when you’re out with your buddies having dinner or drinks after work!

In reality, if I’d told him no, he would find someone else who would say yes. That’s kind of how the world works, at least in the US. We keep on abusing the system and screwing up our priorities until something awful happens, then maybe, just maybe, we change our ways. I do sometimes wish we could go back in time to when you couldn’t buy things unless you could pay.

How have our financial priorities gotten so screwed up? Who’s to blame?