Today’s post is brought to you by Blake at Bean Counter By Day. Enjoy! 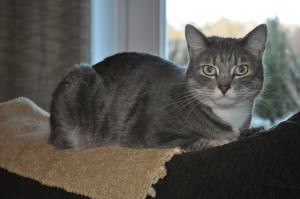 Jo is one of two family felines in the Bean Counter household, both of which Girl Bean Counter brought with her from Atlanta.  Recently, Jo decided to give his mother a little scare by constantly using the bathroom.  How she noticed, I’m still not sure because honestly who pays that much attention to their animals using the bathroom?  But she did notice, and then she got on the internet to Google possible causes.

That was a huge mistake.  Along with all the normal, very treatable, conditions that could have caused this, she got explanations like a blocked urethra which could cause death if not treated immediately.  So off we went to the vet as fast as humanly possible (because the last thing I wanted was her cat dying in my car).

How Much To Spend On a Sick Pet?

I should preface the following by stating we’ve already had a couple of expensive setbacks in our savings goal this year. As a result, all the way up to the vet all I could think about was how much it was going to cost if there was something seriously wrong with Jo. The longer we were in the car, the higher the imaginary bill became and somehow I began thinking about how I was going to tell Girl Bean Counter that we were going to have to put Jo down if it was as expensive as I was fearing.

I know, that makes me sound like a horrible human being.  The truth is, Jo is a very good cat.  He’s affectionate, he’s playful, and he gets along great with my dog.  But at the end of the day, he’s an animal, and I just couldn’t imagine paying $1,000+ for treatments and/or surgeries.

The good news is it turned out only to be a urinary tract infection and barely broke the $200 bill barrier, so Jo is alive and well and back to his normal self.  But the whole experience did get me thinking about what amount of money is financially responsible to spend on a sick pet.  I guess a lot goes into the decision. Will it cure the animal for good?  Is the animal old or young? Can you even afford it (although I’d bet emotion keeps this from being asked as much as it should be)?

In our current situation, trying to save for a wedding, trying to get out of debt before we start a family, I had decided that $1,000+ was just too much.  Especially when there are 6-8 million pets entering shelters every year in this country.  You can’t ever truly replace a pet, but I do think you can find another that makes you just as happy.

People go into debt for a lot of stupid reasons in this country.  They need want a new car,  they want to go on great trips, they have to have the newest iPhone Air 273S….   I can completely understand how someone could feel like going into debt to save an animal would be a good decision.  At the end of the day, I just don’t think I’m one of them.

Luckily, Jo is a resilient little guy and something tells me that he’ll be prowling around the house for years to come, which means my life will be easier because Girl Bean Counter is happy 🙂

Do you know someone that has had to deal with this situation?  Do you think there is an amount where it is finally outrageous to pay for an animal? Do you think I’m a horrible person?  I’m very interested to know what others think about this!

Kim’s Comments: I have spent and probably will spend too much again if we have a pet emergency. In the moment, I usually am too emotional to think about dollars.

Bio: Blake started Bean Counter by Day to give a CPA’s view on all things personal finance. While many posts are money related, career choices, automobiles, and DIY projects are bound to make an appearance. And as always, any questions you need answered are always a privilege!  You can also find me on Twitter!