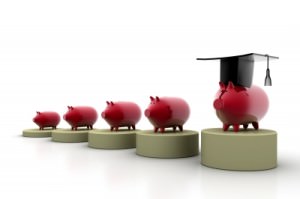 Since closing on the first part of my business sale, we now have enough money to pay off our student loans. Before you start congratulating me, remember that I am 39 years old, and my husband is 43. How on earth do you have student loans in your 40’s?

My husband didn’t decide to become a teacher until he had one failed attempt at college and several different jobs. He was 27 before he started college for real. He graduated at age 31, and then went right into a master’s program. He did work while getting his master’s, but didn’t really finish school until age 33.

I finished my residency and started repaying my loans when I was 27. Most four year college graduates would already have 5-10 years on us. While I never think it’s too late to change careers, and I think our loans were worth it , it’s wise to think about how much debt you want to be paying off as you get older.

When I was a resident, I put my loans into forbearance. The $600 a month payment seem like too much at the time, although I probably could have paid it. I should have at least paid the interest during that period, but I did not. It was all added into my loans.

My husband put his loans into deferment during his master’s program, mainly because he could. We could have made the payment because we were both working. Although interest doesn’t accrue on subsidized loans like in a forbearance, we still got the unsubsidized loan interest added in.

Even if you have to put your loans into deferment or forbearance, try to pay as much as possible. Just because you don’t have to pay them for a period of time doesn’t mean they have gone away.

Consolidate and Make the Minimum Payment

My husband and I both consolidated our loans as fast as possible. In my head, I told myself it was to keep variable interest rates from rising. I was determined to pay more than the minimum payments. Did we do that?

Nope, we decided to become the Joneses. We continued making our minimum payments so we could buy other things.I have no excuse. I don’t regret buying our house or my business, but most of the things we bought were just dumb. Don’t get tricked into basing your lifestyle on minimum payments. Before you know it, payments take over your life and limit your choices.

While I think it can make good financial sense to not pay off you student loans if you have a low interest rate, getting to forty years of age and still having student loans is too much. I haven’t been a student for a long time. I’m almost to bifocal age, and I am still paying off school loans! Sadly, I think I am not alone.

I was watching a financial show the other night, and there was a 31 year old lady who had racked up $192,000 in student loans to go to a private art school. Worse, her parents cosigned on a number of her private loans. She is currently working at Whole Foods and living in her parents’ travel trailer while they are paying $1000 a month on HER loans. Her Mom can’t retire, even though she really wants to. Student loans can’t be discharged in bankruptcy. Really think hard before you sign on the dotted line. If you have to get private loans, maybe your school choice is too expensive.

Student loans are a necessary evil in many peoples’ lives. I would certainly do the same thing again in regards to school and borrowing money to complete my degree. What I wouldn’t do is succumb to lifestyle inflation before paying the dang things off. I’m pleased to say that by the end of April, we should have no more students loans and no other debt aside from our home and rental property mortgages. My only regret is that I waited until almost 40 to finally pay off my student loans. Unlike Andrea at So Over This, I had no extenuating circumstances that caused inability to pay. Take my advice. Pay off those loans before buying stuff you don’t need. Hopefully, you won’t find yourself looking at middle age with debt from your fraternity days.

How would you feel about turning 40 with student loans?