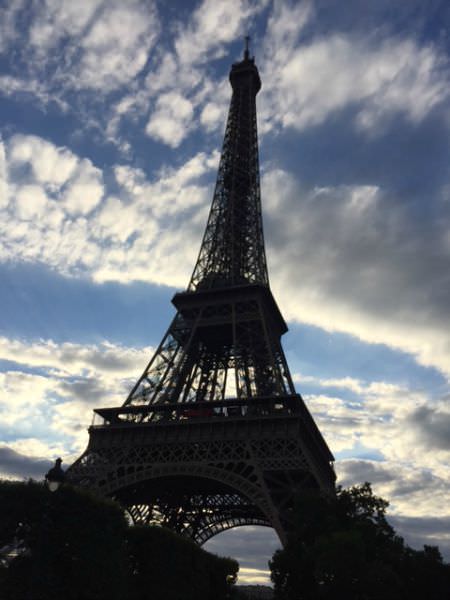 As a part of our European adventure this past summer, we spent four days visiting Paris. I’ll admit that I was prepared to be underwhelmed. Paris is one of those cities often placed on a pedestal, but I’ve also heard crowded, rude, dirty, and expensive used to describe the City of Light.

Happily, Paris exceeded my expectation and we even ended up under budget. If you missed any of the other posts from our trip, here are links to catch up.

Getting to and Around Paris

We arrived at Gare du Nord station after taking the Eurostar from London. Although our hotel was a bit off the beaten path in the 17th district, the metro made transportation easy. Since it didn’t seem worth it to get a metro pass, we instead bought a carnet or book of 10 subway tickets for 14,10€, which Jim and I split. Kids over age four pay full fares on the metro, but you can purchase a kid’s carnet for half price, making our transportation total just over 21€.

We chose the Hyatt Regency Paris Étoile mainly because it was the only Hyatt in Paris that allows three people in a room without having to upgrade to a suite. It seemed like a bargain at 15,000 Hyatt points per night. We elected to pay an extra 6,000 points a day to have lounge access. That ended up being a great plan for breakfast plus snacks and drinks.

I was a little nervous because this hotel has some really bad reviews, but we can’t complain at only paying

$21.81 in taxes for a four night stay. Turns out, the place was great. Yes, the decor is very dated. For a moment, I thought maybe we had entered the jungle room at Graceland, but if you can see beyond mauvey/orangish carpet and some chipped paint, it was more than adequate for sleeping.

The rooms were small but clean, and we had an amazing view of the Eiffel Tower. Breakfast was awesome, and the evening reception kept us going on many long and travel weary days. I actually loved being in the 17th. If felt more like a neighborhood with small cafes and groceries, plus a very much needed lavarie (laundromat). On the same level as the hotel lobby was a small shopping center that is attached to the Port Maillot metro station. This convenience made picking up cheap snacks, water, and hopping on the subway easy.

Disney and the Louvre, Too Crowded!

Despite being away from city center, the hotel was only a 15 minute walk to the Arc de Triomph. We actually walked all over Paris, all the way to the Louvre. Sometimes we walked back or took the metro if we were tired. Paris was extremely easy to navigate.

Our second day was spent with a million other people at Disneyland. It was 100% for our daughter to make

up for all the museums and historical attractions we drug her through. Jim and I weren’t impressed. She thought it was awesome. You have to throw the kids a bone every once in a while. At least it was less expensive than Disney in the U.S.

Originally, we planned on skipping the Louvre due to the sheer volume of tourists trying to get in, but ultimately decided this might be our one shot to see some of the world’s most famous art.

Rather than wait in line for hours, we picked up two adult museum passes for 42€ each. Children are free. These were good for admission to most museums in Paris plus several other popular attractions. Most importantly, it allowed us to bypass the Louvre entry queue and go directly into the museum.

I’d love to say the Louvre was amazing, but in reality, it was hot, crowded, and confusing. We made a beeline for the Mona Lisa and, after getting lost in ancient Egypt for a while, were finally successful. To actually view her, we had to fight a pack of people probably 10 deep to get a close up look. That task completed, our sails were pretty deflated. After seeing a few more famous art pieces, we were happy to leave.

Other Museums Were Great

In spite of Louvre disappointment, we still made our way to the Musée d’Orsay and Musée de l’Orangerie. Both were quiet and uncrowded. I was blown away seeing Monet’s Water Lillies and even my daughter was excited to see so many Van Gogh’s. I’m glad to say I’ve been to the Louvre, but the other museums were much better in my opinion.

The Museum Pass also allowed us to bypass the line to climb L’Arc de Triomph, saving at least another two hours. All in all, we came up about $10 short in getting our dollar value from the pass, but for the hours of standing in line it saved, I think it was worth it.

Eiffel Tower is Just as Nice from the Ground

We chose not to go to the top of the Eiffel Tower. Maybe I’ll regret that someday, but my favorite day in Paris was spending the afternoon in the Champ de Mars gardens with the tower in the background, definitely a million dollar view that cost nothing.

We also visited Notre Dame and took our time exploring the many streets and bridges around the Seine. The Tour de France was set to roll in the day after our departure, so Jim enjoyed checking out all the booths and fanfare set up for that.

We were actually under budget in Paris because of eating so much food from the lounge. It was fun to walk the famed Champs-Élysées, but we were not tempted to shop at all. Less stuff equals more experiences, and those always win out these days, especially on vacation.

Visiting Paris is something any travel loving person should do. I’m not sure I need to go back, but it was a wonderful experience and one made that much better with our free hotel stay and ability to get around cheaply. I love that we can visit some of the most expensive cities in the world and come away not feeling broke!

What would you most love to see in Paris? Have you been to the Louvre?

Table of Contents
Getting to and Around Paris
Hyatt Regency Paris
Disney and the Louvre, Too Crowded!
Other Museums Were Great
Eiffel Tower is Just as Nice from the Ground