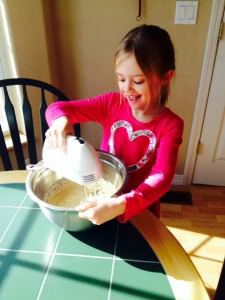 I really wasn’t going to write anything about Valentine’s Day this year. It isn’t a holiday I enjoy. People spending stupid amounts of money on overpriced items to tell someone that you love them one day a year isn’t my idea of a party. However, I know many people like Valentine’s Day or at least feel guilted by society to buy a gift for someone. I think my six year old has gotten the idea of the heavy sell*. Maybe her advice will keep you from spending too much today.

For example, we were at the grocery store LAST WEEK. It was already a sea of pink and red, everything from balloons to flowers to candy. Why you’d buy Valentine’s flowers a week early is beyond me, but there they were.

My daughter: “Boy, Mommy. They sure have a lot of Valentimes  (her pronunciation) stuff here already. Why do they put this much stuff out here?”

Me: “Well, the store wants us to see all this stuff and think we need to buy it for someone for Valentine’s Day. It’s kind of silly, isn’t it?”

Daughter: “Well, why don’t we just go get some stuff to make cupcakes?”

See, kids would much rather do something with you than have all that crap that gets boring in about 5 minutes. Probably your spouse or boyfriend/girlfriend would too.  We did make cupcakes, and she got to crack 4 eggs and use the mixer by herself for the first time. Guaranteed to be a longer memory than any over iced, over priced baked goods you could purchase already made.

This past Wednesday, we were on our way home when a commercial for a jewelry store came on the radio. Basically it kept telling us that “she” really needed some sort of necklace from the store in the advertisement. My daughter, who takes everything literally, actually got a little upset because the tone of the commercial was almost frantic.

“Mommy, why don’t they just give that lady what she needs?”

Me: “Honey, it’s just a commercial. They try to make you think you need to buy whatever they are talking about when you probably don’t really need it and it would be a silly thing to buy. “

Daughter: “Oh, like if we were out of toilet paper, we would NEED to buy some, but if we had a whole bunch and just bought some because it was colorful, that would be silly.”

I’m not really sure where she has seen colorful toilet paper, and I’m not sure I want to know, but the point is please make wise decisions today if you are a last minute Valentine shopper. Spending money on something that is temporary takes away from the long term goal.

I’m not  saying don’t celebrate Valentine’s if you love it, but just remember that sometimes a well thought out free or inexpensive gift means a lot more than buying whatever the store stocks up front for quick purchase.

If you do find some colorful toilet paper, let me know. I’d love to see what it looks like!

What are you doing or not doing to celebrate Valentine’s Day?

*After writing this post, I found out my daughter had an extra dollar after the book fair at school. Instead of bringing it home she asked if they had anything for $1 and bought a stupid eraser. I guess a six year old’s frugality depends on the day!