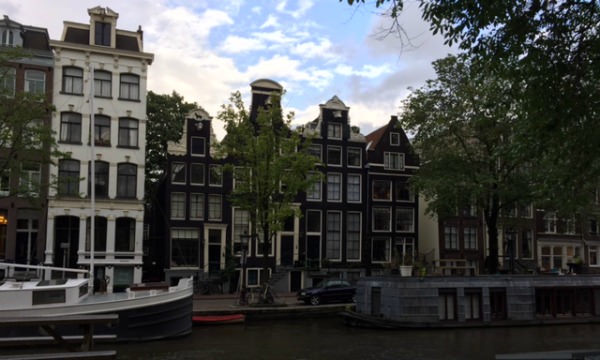 Amsterdam was the last stop on our summer European vacation. I’ve always been told that this is the city where one can legally consume or participate in all sorts of debauchery, but I also know that most cities wear far more than one hat. Heck, if you think all Coloradans sit around smoking weed all day, you aren’t really paying attention. I would advise parents not to worry about visiting Amsterdam with children. Despite some awful weather, we had a great time. If you missed other stops on our tour, feel free to catch up.

Double Tree Amsterdam Above and Beyond

We arrived at Centraal Station by train from Paris. I thought it was strange how security was non-existent as we boarded the train. Sadly, an alleged terrorist attempted an attack on this very same train shortly after we arrived back home. I hope they have since put some stronger measures in place. Our train ride was thankfully uneventful.

We chose the Doubletree by Hilton Hotel Amsterdam Centraal Station for our first two days because it was bookable at 60,000 Hilton Honors points per night, and it is right beside the train station. I know that seems like lots of points, but if you have a Hilton Surplus American Express card, it’s really easy to build a balance. Grocery shopping, gas, and restaurant purchases all net 6x points. Jim also frequently stays at Hilton hotels for work trips, so we usually have a good stash of Hilton rewards.

The other nice thing about booking Hiltons with points is that there is almost always an option to upgrade after reserving a room, often for very low cost. We were able to score a one bedroom suite for 30€ per night. After our tiny room in Paris, it was fabulous to have so much space.

The staff at the Doubletree was amazing, probably the best of our whole three week trip. This hotel just seemed to go out of its way with extras like free bottles of water and apples that were always available in the lobby. We were allowed to check in early and check out late. I’m not sure this is standard or because we are Hilton Gold members. Whatever the reason, it was much appreciated. 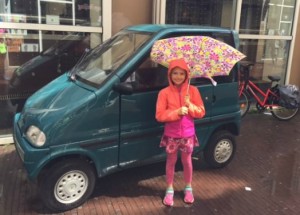 We only had three days in Amsterdam, which actually was plenty because it rained every day we were there. I was at Walmart picking up last minute items the night before we left for our trip. On a whim, I bought three travel umbrellas, which turned out to be sheer brilliance.

Amsterdam is actually pretty small. I bet you can walk just about anywhere in under an hour, but they also have a very useful and easy tram system that came in handy with the poor weather. As we were planning out trip, I knew the Anne Frank House was a must see attraction. I was fascinated by Anne Frank: The Diary of a Young Girl when I was in elementary school, and I couldn’t miss seeing the house in person.

Luckily, I am a planner and was able to score tickets soon after they went on sale, about 5 months out. Even then, the most popular times were sold out. My best advice is buy as early as possible. You can purchase same day tickets, but the lines during the summer are almost always 2-3 hours long, which would have been miserable in the rain!

I was a little nervous about taking an eight year old to see the home of a young girl who had to hide from the Nazis and eventually died in a concentration camp. How do you explain the world’s atrocities to your child? At the same time, I want my daughter to know that the world is not all fairies and pixie dust. Awful, terrible things happen. It’s important to remember them so we don’t repeat history’s mistakes, at least that’s a hope.

The Anne Frank House produced such a contrast of emotions. On one had, it was truly sad to think about what people had to endure, simply for being born of a certain ethnicity. On the other hand, the fact that Anne and her family were able to hide for as long as they did and that her words live on to this day seems very hopeful and inspiring. Seeing her actual diary was beyond words.

I think our daughter understood it as much as a third grader can. After coming home, she read the youth version of Anne Frank’s Diary plus many other books about the Holocaust. I guess if nothing else, it brought a new topic of conversation about real life good vs evil. At admission costs of 9€ per adult and 4.5€ per child, it was one of the best bargains of our trip.

The other big thing we did was take a canal boat tour  costing 43€ for the three of us. Our driver polled the boat to see 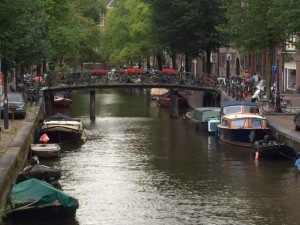 what languages were spoken and did the tour commentary in Dutch, English, French, and Spanish! The US is so behind the rest of the world in being multilingual. Even though it wasn’t cheap, I highly recommend taking a ride through the famous canals of Amsterdam.

We spent the rest of our time walking around and taking in the architecture,  multiple canals, and bridges that make Amsterdam unique. It would have been fun to rent bicycles, but most cyclists were zipping around so fast that we were afraid our daughter (or myself) might end up injured. From the look of some of the dilapidated bikes left lying around, I’d say that happens fairly often.

We would have loved to visit Vondelpark, but the weather did not cooperate. We also skipped the Van Gogh museum. After seeing so much art in Paris, our quota was already filled.

A Little Bit of Red Light Everywhere You Look

Although we avoided the Red Light District like the plague, there were still pot stores everywhere and enough sex shops that our daughter had many questions. We have already had the marijuana talk because those stores are in our hometown. As far as the other, I finally told her to ask me that again in a couple of years. I think visiting Amsterdam with children is a great idea, but do be ready for the colorful aspect you’ll inevitably run into.

For our last night in Amsterdam, we chose to stay at the Hilton Airport Schiphol. The airport is about a 30 minute train ride from the city. Since we had an early flight, staying closer seemed like a good idea. I originally booked the hotel for a 180€ rate but found points availability at a later date, making this night free. 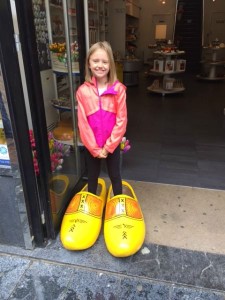 Again, sometimes my spidey sense does pay off because we found out the night before leaving Europe that our flight was cancelled. I probably walked from the Hilton to the airport four times while trying to get us rebooked and ticketed. It would have been so much harder being a half hour away.

Our cancelled flight actually ended up being a good thing because instead of connecting through Vienna per our original reservation, we got to take a direct business class flight on Delta straight to JFK. I can honestly say it was the best plane ride of my life, and the nine hour flight time seemed like 30 minutes. I would not hesitate to fly coach if that was my option, but being able to splurge on our first family international trip was amazing. Even though it cost 70,000 United miles for each of us, I would do it over again in a heartbeat.

Back in the USA

After a couple of nights in New York, we flew back home and ended our European adventure. It was bittersweet. We still talk about all the things we saw and did and probably will for years. I think travel is one of the best gifts we can give our children. Thankfully, we have the opportunity to offer that to our daughter and the ability to use credit card rewards to help offset the cost. Even if she grows up to be a homebody, the experience of seeing the world from different perspectives is priceless.

Table of Contents
Double Tree Amsterdam Above and Beyond
Bring an Umbrella
Buy Anne Frank Tickets Early!
Canals of Amsterdam
A Little Bit of Red Light Everywhere You Look
Airport Hotels Rock
Back in the USA