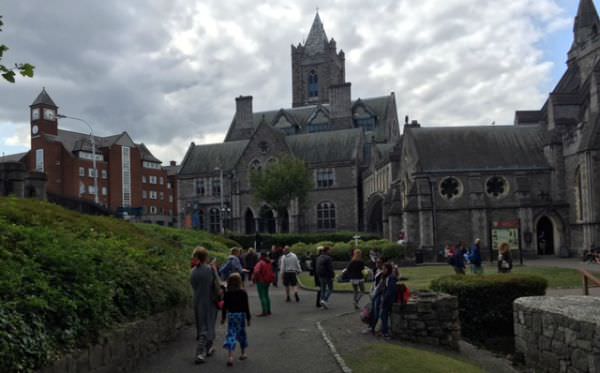 For the next several Friday’s I’ll be sharing stories and reviews from our family trip to Europe. Hopefully, if you’ve ever wanted to go, you can learn what to do and not to do from some of our wins and mistakes. Today, I’ll talk about getting to Europe, visiting Dublin, and how to help kids (and parents) overcome jet lag.

Before this trip, the only time I’ve ever been to Europe was a week long trip to Italy years ago. In fact, after booking that trip, we found out I was pregnant. I got to do Italy at six months along and no, I did not sample any wine! It was a great trip, but I swore that if we ever went somewhere far away again, I would take more time to acclimate.

Back then, we always booked the cheapest flights, regardless of connections or time of day. That meant going from my parents house near Nashville to Atlanta, then across the pond to Paris and on to Rome. We missed our connection in Paris and had to spend four hours in the airport. By the time we arrived, we didn’t know if we were coming or going. It was even worse on the way back, with the added bonus of becoming violently ill the day after I got home. This time, especially for our eight year old, I wanted to do better.

We took advantage of a great redemption value by using British Airways Avios to book flights from the US to Dublin. Because British Airways uses an award chart that is distanced based, points needed are based on how far you’re going, regardless of whether you’re changing continents or flying across a single country.

We booked on partner airline Aer Lingus from Boston to Dublin because they didn’t have fuel charges and each ticket only costs 12,500 Avios in economy or 25,000 Avios for business class. The points needed for a business class ticket jumped up to 37,500 in April of this year, but we were already booked before the change.

To make things easier on ourselves, we flew from Colorado to Boston two days before our flight to Dublin. That way we got to see a new city and get used to Eastern Standard Time. Dublin is only five hours ahead of the east coast, so that was much better than the seven hours we would have struggled with had we done the whole trip in a day.

Are We Snobs for Flying Luxury?

Our flight left Boston at 9PM and lasted just under six hours. I have never been able to sleep on planes, so I was hoping the lie flat business class seats would help. In reality, the flight was probably too short to count on getting quality sleep.

Dinner was served just after hitting cruising altitude, but we had already eaten. It seems when you fly with the upper classes in business or first, you get lounge access that is much better than your standard Admiral’s or United Clubs. We found that the Aer Lingus business lounge had decent sandwiches and snacks, and it was much better than having a heavy meal at 10PM, although the business class food did smell delicious.

Even though Jim and I didn’t sleep very much, it was nice to have huge, comfy seats to lounge in and tons of movie and TV options to keep us occupied. I did recline my seat fully and tried to doze off, but every bump seemed to wake me up. Our daughter, however, was out cold about 30 minutes into the flight and slept until I woke her up for breakfast about 45 minutes before landing. For that reason alone, it was probably worth the extra points for business class. If it was just Jim and myself, I think we would have been fine in coach.

One thing I will say about being in front of the plane; it was very odd to sit there while all the regular folks made their way to back to economy. A little boy asked his dad if one of the open business class seats was his. The Dad told him,

“No, this is all very wasteful.”

I wanted to tell the guy we only paid about $35 each for our tickets, but I guess I don’t have to explain myself to anyone!

We arrived in Dublin at 8AM, which felt like 3AM to our warped senses. When I booked our hotel, I made sure it was right by the airport and that we would be able to check in upon arrival. We felt pretty awake after clearing customs, but after a frustrating time of locating the shuttle stop and finally making it back to the hotel, we all crashed until about noon.

Our room at the Radisson Blue Dublin Airport was certainly nothing to write home about, but it was more than adequate as a place to sleep and shower. For 38,000 Club Carlson points and the ability to check in early, it was a good deal. Once we woke from our naps and had some lunch, we wanted to use the rest of the day to see Dublin.

Our transportation options were to go back to the airport and catch a bus into town for about 15€ or take a cab right from the hotel. It cost 25€ and was about 20 minutes faster than the bus. As our time was limited, we decided to take the easy option. That was the only time we used a cab during the entire trip.

To combat jet lag, we kept busy by walking around Dublin, visiting Dublin Castle and Trinity College, and admiring the many churches and parks in the city center area. After having dinner at a diner we decided to take the Dublin Bus for out return trip. The Airlink 747 bus stops at many attractions in the city before heading straight to the airport, and we were able to walk back to our hotel without tracking down the shuttle. It did take more, time but I actually enjoyed riding the bus much more than taking a taxi.

We made ourselves go to bed at 10PM. It wasn’t that hard to fall asleep, and we felt normal the next day. I think jet

lag is much worse going the other direction, although if we hadn’t been able to sleep a few hours that morning I might be singing a different tune.

I wish we had planned more time in Ireland. I would love to see the rural areas, but we had a flight out the next morning to Scotland and Jim’s bucket list item of seeing the British Open in St. Andrews. I’ll have to leave you in suspense as to what a child and non-golfer can do when their Dad and husband spends all day watching golf!

Have you ever spent time in Dublin? Do you prefer buses or taxis?