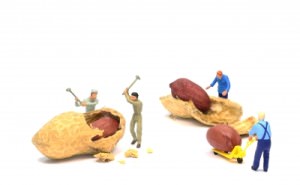 A recent article from Yahoo Finance listed the 10 companies paying Americans the least in wages. I wasn’t really surprised to see Walmart in the number one slot, followed by McDonalds, Target, Kroger, and Yum! Foods to round out the top five.  All of the top ten except ailing retailer Sears saw profits rise, often dramatically, while wages tend to remain low. The average pay at Wal-Mart is $9/hour for sales associates, while the CEO took home over $20 million. While I am certainly no fan of Wal-Mart, is it really the bad guy media leads us to believe?

It’s Easy to Hate the CEO

I think we all remember all the golden parachutes that were issued to CEO’s during the crash a few years ago. John at Frugal Rules recently highlighted the growing disparity in wealth distribution in the US. It’s easy to hate those who are raking in the money while everyone else is struggling, but let’s look at the numbers.

If Walmart’s CEO took $20 million of his salary and gave it back to the workers who keep Walmart running from day to day, would that be a good solution? There are 1.4 million Walmart workers in the US. If you divide that $20 million up equally between the workers, that’s $14.28  per employee. Not exactly a bump into the next tax bracket, is it?

Yes, I realize there are other really high wage earners on the Walmart team, and I agree that $20 million dollars is more than any one person needs to live, but I don’t think reducing top tier salaries is going to help anyone working the express lane.

We’re Stuck in a Culture of Cheap and Fast

Walmart likes to pride itself on being the All-American store, providing affordable wares to help the working class. Fast food has tons of selections for around a dollar. However, I don’t think any of us shop at Walmart for the great customer service or eat at Taco Bell for the nutritious offerings. We want cheap and fast. If we don’t get that, we move on to the next place.

Most of the time we don’t think about teenage workers in Sri Lanka or overcrowded slaughterhouses when we go to get our cheap and fast goods. As a result, companies can’t pay American workers to make products cheaply enough to support our needs.

Growing up in my hometown, you could graduate from high school and get a job in one of the factories. Wages and benefits were good enough to support a family and boost them into middle class. Now, all the factories have moved to other countries, and the best paying gig in town for unskilled workers is at Walmart.

Like I said before, it’s really easy to blame the companies, or we could  tell people not to shop at stores that pay low wages. That’s easier said than done. I needed to buy bubble wrap this weekend. Guess where the only place to buy bubble wrap is? Yep, Walmart. Like it or not, cheap and fast has done away with many higher quality stores. I also have to admit that if I’m just buying bubble wrap, it doesn’t need to be high quality or expensive to do the job.

The days when you could drop out of high school and get a good paying  job are long gone, and they aren’t coming back. I’m not saying that everyone who works at Walmart is a high school drop out, but I would ague that most people don’t spend their lives dreaming of being a Walmart associate. We are all aware of the limited income potential. People take that job when there is nothing better available.

Walmart isn’t going anywhere. They aren’t going to start paying high wages. In order to do that, that would mean raising prices for the consumer, and who would shop there if it wasn’t cheap?

We need to change our ideas. Instead of thinking that some company owes us a higher wage, we need to educate and train ourselves to earn a higher wage. Making school and learning a priority for our kids is a great way to start. Not everyone was meant to go to college, but there are lots of valuable skills that can earn a livable wage. As long as there are people willing to work for low wages and be treated like crap, companies are not going to do any better.  There is nothing wrong with working a minimum wage job. It’s an honest living, but you also can’t complain if that is your choice. Walmart may be the bad guy, but we certainly do our share of enabling.

How do you feel about Walmart and their labor practices? Is some of that the fault of consumers? Would you continue to shop at Walmart if it meant higher prices but better wages for employees?