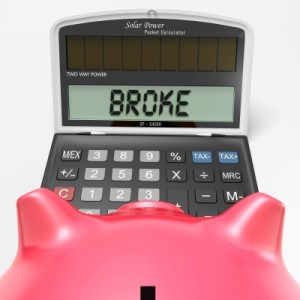 When we were struggling with credit card debt and had a negative net worth, it was easy to join in one of the many conversations going on around me by others who were also broke or in similar debt situations. I can remember saying things like this.

“I’ll probably owe Visa until the day I die.”

“I don’t want to wait until I’m old to enjoy life.”

“It’s normal to have debt when you’re young.”

“I can’t afford to max out my retirement plan/invest in stocks/save for a rainy day”. How are people supposed to live on so little take home pay?”

I could list many more euphemisms from my debt laden days, but you get the picture. It’s easy to get into conversations with people who are broke. It’s really easy to toss out excuses as to why we’re there as we all go out to dinner in our new cars purchased on 60 month repayment plans.

It was also very easy to throw stones at those who weren’t broke, not the flashy ones who brag about wealth while everything is mortgaged and charged to the hilt, but those people who very quietly purchase a rental property all in cash or are able to donate $10,000 to a charity each Christmas.

A perfect example could be our former neighbors. They bought their home in cash. $400,000 IN CASH. Who were these super rich people moving across the street? Shaun White? Carmelo Anthony?

Well, they turned out to be a retired teacher and her husband who worked in the parts department for an auto dealership. These are the type people I used to look at and wonder how miserable their lives must be from living miserly. Maybe they had a rich uncle who left them a mint. In reality, it was because they were smart at managing money. They were the sweetest people on the planet, but sadly, many neighbors did not like them, and I believe it was because they paid for that house in cash. Odd I know, but it stings to see someone doing things you can’t, especially if your behaviors are why you can’t.

Are You Going To Throw Stones At Me?

Fast forward to today. We’ve been living almost a year without a credit card balance. Our net worth has grown like I would have never believed, and we sock a ton of money away each month. Jim has a great job with a higher salary that he’s ever had, and I am working less hours but making more money than I ever have. We’ve become the ones with targets on our backs.

Why is it so much harder to talk to people about money when you actually have some? When I do hear some ridiculous statement from someone about why they are broke, I usually keep my mouth shut, but this is my blog and I can say what I want. I had a comment on my post about if a million dollars makes you rich that said it was a redundant question if you were on food stamps. I don’t think it is.

This is Why You Are Still Broke

A huge excuse I hear is that people don’t make much money at their jobs or don’t feel their salary is adequate to save money or pay off debt. Is this an excuse or a choice?

Many people who complain of not having enough money are buying new iPads, getting tatoos, sporting fancy rims on their new cars, and have a satellite dish outside their apartment. If this is how you want to spend your money, that’s your business, but quit complaining about being broke!

Get Out There and Earn More Money!

Cutting expenses only gets you so far. Anyone can make extra money. It might not be fun. It might be by doing something your friends think is beneath you, like cleaning someone’s house or mowing their yard. You might actually have to learn some new skills. It might take time away from your family or the things you like to do, but keep in mind that it’s a means to an end. Aren’t you tired of being broke?

Extra income might start slowly at first, but once you begin to earn more money, it’s addictive. Once you hit $500 a month, motivation and creativity seem to go into overdrive and you will probably surprise yourself about how much extra income you are able to bring in. $500 a month at 6% interest for 30 years makes you a millionaire. Tell me why you can’t do that?

How are you going to earn extra money this month? Do you use being broke as an excuse?