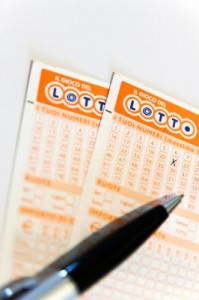 This is a post from regular contributor, Kyle James. Enjoy!

I recently read an article recently on the Business Week website about a guy name Jack Whittaker who in 2002 won the $314 million dollar PowerBall lottery and opted for the one time lump payment of $93 million. Pretty lucky guy, right?

Absolutely ruined him. Everyone wanted money from him. He lost his so-called friends. He couldn’t trust anyone. His wife left him. He hung out at strip clubs. Drank like a fish. Ugly stuff.

The interesting thing was that he was already a very successful entrepreneur before he hit the big jackpot. Speaks to the benefits of hard work and “making it” on your own.

So this made me think, “Would I remain frugal if I won the lottery?” I like to think I would.

Sure, I would upgrade some things. Pay off the car and the house. Maybe take the family to Europe in a couple years. But real frugality is a choice to conserve and seek out value, not done because of situation.

I know many people that started being frugal because of circumstance and stayed that way when they came out of debt because it provided intrinsic satisfaction. Priceless. I also believe if you have a disposition towards frugal living, charity, and helping others then you would likely remain that way even if you won a huge sum of money.

Winning a ton of money would seem to make you more of what you already are. If you are decent, humble, frugal, and generous, it makes you more so. The same can probably be said if you are irresponsible, immature, and wasteful.

With that said, I would welcome the opportunity to test my theory. I have a PayPal account. Any takers?

Do you think you would remain frugal if you won the lottery? I look forward to your comments.

About the Author: Kyle James writes daily at the Rather-Be-Shopping.com Blog about frugality, living

Kim’s Comments: I think there is a such thing as too much money. If you gave me $93 million dollars tomorrow, I’d pay off all my debt, keep enough to live very comfortably and travel in style for the rest of my life. I would help my family within reason, then I’d start a charity or scholarship fund with the rest.